Nigerian security agents accused of being responsible for…

Nnamdi Kanu advises ESN to “ensure that Biafra land is safe and peaceful.” 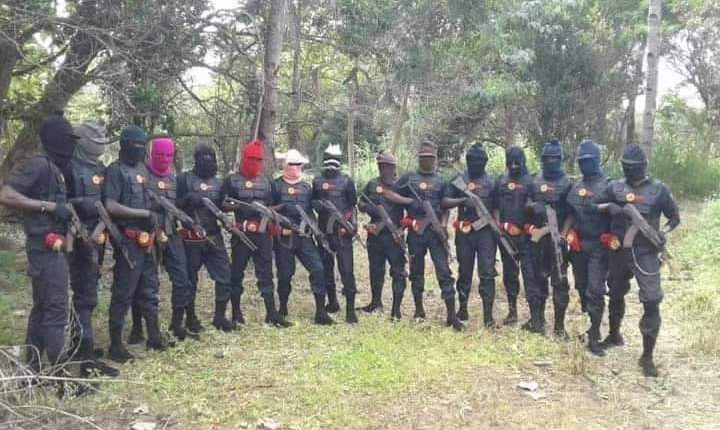 MAZI NNAMDI KANU DIRECTED ESN TO MAKE SURE THAT BIAFRA LAND WILL BE SAFE AND PEACEFUL THIS FESTIVE SUMMER—IPOB.

It is basic to convey the message from our extraordinary chief Mazi Nnamdi KANU to all Biafrans both home and abroad including the of all shapes and sizes, legislators and business people in Biafraland to shut down all type of brutality and strain against our kin as our adversaries are steadily taking advantage of our kin and enrolling hoodlums to annihilate specifically Igboland and pin it on IPOB.

This message is from our great prophet and unwavering liberator Mazi Nnamdi Okwuchukwu KANU, who the Nigerian government has illegally detained in DSS custody for more than a year. During their visit to him today, Thursday, December 22, 2022, at Abuja DSS custody, he conveyed the message through his lawyers.

Our leader issued a strong warning to those who are hired and bought by the criminal in the belief that he is a member of the IPOB and a disciple of Mazi Nnamdi Kanu to cause trouble in the Eastern region to stop being agents of destabilization because they will not be successful. He said anyone creating some issues in the district should be managed regardless of how high the individual’s level might be, whenever, quickly. According to Onyeisi Mazi Nnamdi KANU, no one should disturb or threaten our people during the holiday season. The plans of our adversaries are to use the names IPOB and ESN as enemies of Biafra to destabilize Igboland, but they have utterly failed and cannot resurrect now that we have completely defeated them.

ALSO READ:  Don’t touch Peter’s Obi. There is a grace following him that will disgrace any one fighting against him - - - - Pastor Chris Oyakhilome

He urged the IPOB leadership to keep our land peaceful, and he said that ESN officers should concentrate on making our land peaceful and free of crime this holiday season. Anyone caught kidnapping, stealing cars, or terrorizing our people in any way must be dealt with, according to Mazi Nnamdi KANU’s order.

Nigeria Government secrecies and Fulani authority understood that our kin are great individuals, helping one another and their communites. They made the decision to create uncertainty and confusion in order to eliminate Alaigbo through the dissidents; however, they will not be able to do so, and Nnamdi KANU and IPOB will be apprehended and soon be released.

Because light cannot be obscured by darkness, Malami’s janjaweed terrorist government and cabals are powerless to intervene.

While using the media to spread these negative narratives, our adversaries and their backers are seriously working to destabilize Southeast and portray our region as unsafe. However, due to the fact that our people are aware of who they are and what their plans are, state-sponsored insecurity and media extortion against the Eastern Region will not work.

In a violent protest, three Kurdish activists were murdered, causing the destruction of millions of euros worth of property in Paris.