Nnamdi Kanu And IPOB Has Shaken Nigeria To The Foundation… 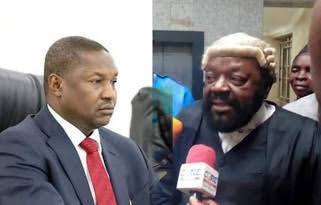 The Federal Government and the Attorney General of the Federation have applied to the High Court of Abia State for extension of time to file their defense to the Fundamental Rights suit filed by Barrister Aloy Ejimakor on behalf of Mazi Nnamdi Kanu.

The suit is primarily aimed at releasing Kanu, the leader of the Indigenous Peoples of Biafra (IPOB), from detention and halting his prosecution.

It would be recalled that Kanu had in late August ap­proached the Abia High Court to enforce his fundamental rights, stemming from the military invasion of his Umuahia home in 2017 and his extraordinary rendition from Kenya in June 2021.

When the matter last came up for hearing on October 7, it turned out that the case file had not been assigned from the vacation court where it was last heard on September 21 when neither the Federal Government, nor the Attor­ney General made an appear­ance.

According to court pro­cesses obtained by Saturday INDEPENDENT, the respon­dents, including the Federal Government and the Attor­ney, were served on 10th Sep­tember, 2021.

That means that they had five days from the date of service to reply to the suit in accordance with the Funda­mental Rights Enforcement procedures. Those five days expired on September 15, 2021.

The application for exten­sion of time, which was filed on October 6 by the office of the Attorney General, is being opposed by Barrister Ejima­kor.

ALSO READ:  HURIWA is a notorious bigoted organization and bunch of clowns — Gumi

A look at the application showed that they were plead­ing for the discretion of the court to accept their defense despite its lateness.

In opposing the applica­tion, Barrister Ejimakor cited statutory and judicial authorities that disallowed inordinate delays in hearing cases of fundamental rights, especially in situations where the applicant is in detention.

Ejimakor argued further that “It beggars belief that it took the Federal Republic of Nigeria and the Office of the Attorney General of the Federation with presumably thousands of lawyers almost one month after being served a fundamental rights suit to prepare a counter affidavit.”

It also emerged that the case was late last week as­signed for hearing to Abia High Court 1, which is presid­ed over by the Chief Judge of the State.

Our checks revealed that the next hearing date was yet to be set.