EPL: Guardiola compares Liverpool vs Man City with US…

Nnamdi Kanu: There is injustice in this country — Father Mbaka 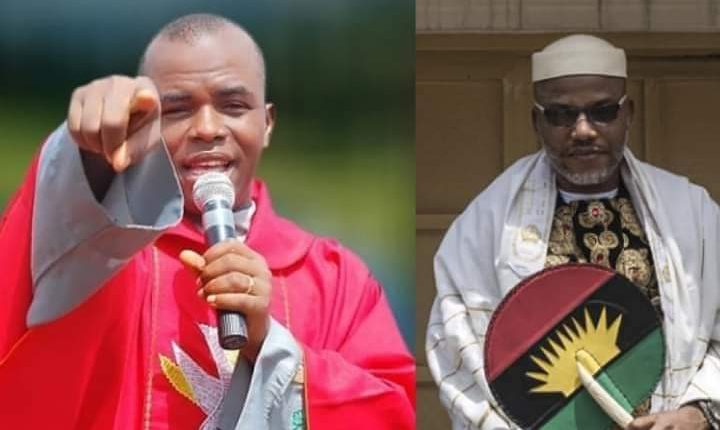 The founder of Adoration Ministry Enugu State, Rev. Father Ejike Mbaka has lambasted President Muhammadu Buhari and urged Igbo leaders to demand for the immediate release of the leader of the Indigenous People Of Biafra, Mazi Nnamdi Kanu.

Speaking during a service on Wednesday, Father Mbaka said since Nnamdi Kanu was kidnapped in Kenya, banditry, Kidnapping, bad roads, terrorism, unemployment have not stopped. So what is the need of holding him?

“Nnamdi Kanu is one of the ingenious brains that we have in this country and we shouldn’t let anything happen to him because he has never touched an ant.”

“Nnamdi Kanu is just a spokesperson. Even if he is killed, more tough Nnamdi Kanus will emerge. Nnamdi Kanu is not the cause of unemployment, killings, bad roads, banditry in this country”.

“Only two persons were killed in Sunday Igboho’s House and Court awarded 20 billion Naira in his favour, how much do you think should be awarded to Nnamdi Kanu that many people were killed in House?”.

“There is injustice in this country and I will keep speaking against it. Nnamdi Kanu is one of my children and I will keep mentioning his name Nnamdi till he is released. Igbo leaders should raise up for Nnamdi Kanu,” Mbaka said.

Why we are accepting ISWAP terrorists — Nigerian Army