BREAKING: Anxieties In Aso-Rock As US Govt Summons Malami, 4…

NNAMDI KANU’S SURETIES : Why the FG influenced court is silent about the genocidal military invasion of Nnamdi Kanu’s home. 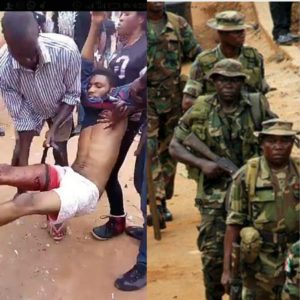 The decision of an Abuja Division of the Federal High Court for three sureties to pay N100 million each or produce separatist leader, Nnamdi Kanu, has continued to generate discussion among Nigerians.

Mr Kanu, who is facing trial on alleged treasonable offences, disappeared in September 2017 after his lawyer, Ifeanyi Ejiofor, accused the Nigerian army of attempting to kill him during a military raid at the defendant’s residence in Abia State. The leader of the Indigenous People of Biafra, (IPOB) disappeared five months after he was granted bail, in April 2017.

Following his disappearance, the court, presided over by a judge, Binta Nyako, ordered Mr Kanu’s sureties, including a serving senator, Eyinnaya Abaribe to either produce the defendant or pay N100 million each, as contained in Mr Kanu’s bail condition. The judge also noted that the sureties stood the risk of going to jail, should they fail to produce Mr Kanu.


“You have only three options: produce Nnamdi Kanu, forfeit the bond (N100 million), or request for time to bring him back to court to face his trial.  “Once you sign to be somebody’s surety, that person automatically becomes your responsibility,” Mrs Nyako said, shortly after Mr Kanu’s disappearance while addressing a lawyer, representing Mr Abaribe in court.  Following the recent reappearance of Mr Kanu in Israel, some lawyers viewed possible options for Mr Kanu’s return to include a diplomatic action between Nigerian government and the government of Israel.

“Such a thing (extradition) can only be done through diplomatic agreement by the two countries,” said a Senior Advocate of Nigeria, Simon Ameh.  Mr Ameh added that the Nigerian courts cannot make a direct order for Mr Kanu’s return from Israel.  Another lawyer, Folarin Aluko, however, explained the role of the court in the diplomatic action noted by Mr Ameh.  “Nigeria can apply for Mr Kanu’s extradition to Nigeria, following the procedures laid down in the Extradition Law of the foreign country, and the provisions of Nigeria’s Extradition Act. Sen. Enyinnaya Abaribe  “Looking at Nigerian law, for example, Section 1 of the Extradition Act provides for the judicial determination of an Extradition Application.


The Federal High Court is vested with the jurisdiction by virtue of Section 251 (i) of the 1999 Constitution (as amended), while the Extradition is within the jurisdiction of the Federal Government, by virtue of Item 27 of the Exclusive Legislative list contained in Part 1, Second Schedule to the 1999 Constitution of the Federal Republic of Nigeria (as amended).”  Mr Aluko added that extradition laws globally frown at cases where its purpose is to prosecute someone for reasons including their political believes.

During the last hearing, however, Mrs Nyako ordered the sureties; Messrs Abaribe, a Jewish Priest Ben El-Shalom and a banker, Tochukwu Uchendu to deposit the agreed bond to the court registrar within two months from November 14 when the order was made.  The sum of N300 million expected from the sureties is to remain a temporary property of the court, for six months.


The court ruled that the sureties would be forced to either produce Mr Kanu or forfeit the bond, after six months.  Lawyers have, however, expressed divergent views on the recent order. While a lawyer Kasiemobi Oranugo views the position of the judge as “a violation of the terms of contract”, another lawyer, Monday Ejeh, says the sureties have a duty to produce Mr Kanu or forfeit their bond.  “In Kenny’s Outline of Criminal Law; bail is defined as contract whereby a person is delivered to a third person called surety on the understanding that the surety would ensure that the person is produced whenever his presence is needed.

ALSO READ:  No President Have Ever Gotten The One Life Chance To Reach Twitter Gold Verification, Twitter Honors Peter Obi With Golden Verification

“From the above definition, we ought to beam our search light on two important words that rear their heads, which are “contract and surety,” Mr Oranugo told SaharaNews in an attempt to explain the latest ruling on Mr Kanu’s bail.  Citing parts of some previous Supreme Court decisions, Mr Oranugo gave what he described as the apex court’s definition of a contract, as well as its pattern of determination.  “Contract is defined as an agreement between two or more persons which creates an obligation to do or not to do a particular thing. Its essentials are competent parties, subject matter, a legal consideration, mutuality of agreement and mutuality of obligation”.


“A contract, generally, may be discharged through the following, namely

ALSO READ:  JUST IN: Lack of vehicles prevents the police from intervening as more than 100 Herdsmen attacks Adamawa community

(a) By performance – if both parties have done all that is required of them,

(b) By agreement – if both parties have mutually agreed to put an end to their contractual relationship,

(c) By frustration – if some event outside the control of the parties take place, making performance impossible and

(d) By breach – where the innocent party is relieved and the party in default may be liable for damages”.  “Pursuant to the above premises, it will be crystal clear that Senator Enyinnaya Abaribe and two others only entered into a contractual agreement with the court with respect to the release of Nnamdi Kanu on bail.


“It will also be deduced that the contract was not in any way breached by either of the parties, but was frustrated by an event or a force outside the contemplation or control of the parties,” Mr Oranugo said.  In a different opinion, however, Mr Ejeh views that the FHC was right in its November, 14 ruling.  “The law is that the sureties are like guarantors.

ALSO READ:  Today, the 3-member Court of Appeal Justices failed to come to Court to hear the appeal against the proscription of IPOB & my Motion for leave to join #MNK as a beneficial party in the appeal.--Lawyer

They hold themselves out as collaterals and guarantee the continuous availability of a defendant in a criminal case.  “In doing this, sureties enter into a bond; which simply means they tell the court that they will always provide the defendant whenever he is needed in court. And in the event they fail in this regard, they will be liable to forfeit, to the government, a particular sum of money on the bond.  “If they fail or neglect to pay the bond, they will be liable to be committed to prison for a period not exceeding six months.


“Thus, what Tochukwu Uchendu, Senator Enyinnaya Abaribe and Ben El Shalom; who guaranteed the continuous availability of Nnamdi Kanu for his trial need to do is to provide him on the next adjourned date or ordinarily stand the risk of coughing out the sum of N300 million bail bond to the federal government or stand the risk of, at most, six months imprisonment for failure to so do.”

2019 ELECTION : The blood baths in Biafra land occasioned Nigeria government is still fresh on our minds – IPOB replies those telling them to forget election boycott