JUST IN: Radio Biafra Reacts to Murder Allegation by Asari…

Nigeria Constitution Is Carefully Designed To Frustrate And… 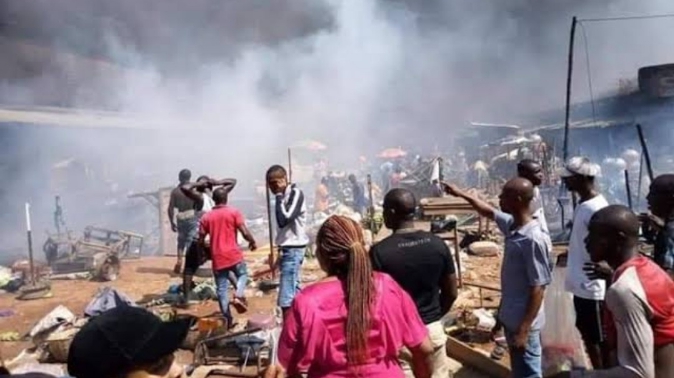 SAHARANEWS – The inferno at the popular Ochanja market in Onitsha on Wednesday was bizarre and heartbreaking.
Lives, properties, and goods were lost. People were injured, others were burnt with a high degree of fire, while some hopes were obviously shattered at this hard time in Nigeria.

And I ask: for how long shall we live like this? When shall those in the helm of our affairs promulgate a law that will better mankind in this part of the world we live in? I believe that if things were gotten right, those lives lost at the Ochanja inferno would have been saved. Because a fully loaded truck with such an inflammable content shouldn’t have taken a route of a busy place or market square by that time of the day.

I wonder what was the condition of the truck that caused it to fell over and spilled its flammable substance. The deplorable condition of our roads wouldn’t be ruled out as the major cause of the truck falling over or that the driver of the truck was not qualified to drive such a gigantic vehicle.

In a functional and people-oriented society, HEALTH and SAFETY are of very importance. A near-missed, accident (fatal or injured) shouldn’t be taken for granted.
As a matter of urgency, it is imperative we charge those in our authorities to step up on the Health and Safety issues in our organizations, environments, markets, roads, buildings and so on. Policies that will be devoid of sentiments, bias, nepotism, and negativities should be introduced in assuring Health and Saftey in every phase of our endeavours. I am pretty sure and can go on a bet with anyone that, if our Health and Safety policies are stringently put in place, the yesterday’s inferno would have been avoided or the fire itself wouldn’t have caused such havoc.

So, let’s lend our voices on the need to prioritize Health and Safety in Nigeria because anyone could be directly or indirectly affected in any future occurrence.

May God console the victims of the fire incidents, grant the dead eternal rest and give their mourners the courage to forge ahead.