Pope Francis reveals the greatest sin, say it is not sex…

BREAKING: Bloodbath Averted As Soldiers Engages Police In A… 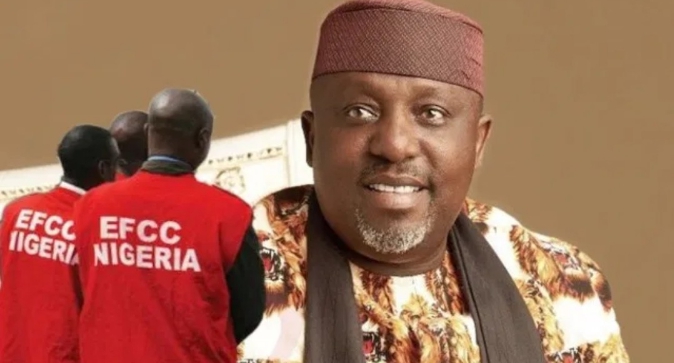 SAHARANEWS – Senator Rochas Okorocha has hinted at the possibility of joining the Indigenous People of Biafra, IPOB.

But Mr Okorocha said he will only join the group if its supreme leader, Mazi Nnamdi Kanu, is able to convince him to do so.

The IPOB is a secessionist group that seeks a referendum for the independence of the Igbo ethnic group of Nigeria, and creation of a Biafran state.

Supporters of Biafran independence are from the Igbo, Izon (Ijaw), Anang, Igbanke (Edo), Ishekiri, Urhobo, Igala, Idoma and other ethnic groups within the map of defunct Biafra state.

IPOB claims that Biafrans are marginalized by the government in Abuja through lack of resource distribution, poor investment, and an unfair heavily militarized presence in their region.

The Nigerian government once cracked down on IPOB members who peacefully protested due to Kanu’s arrest and incarceration despite various courts rulings for his release, reports Igbere TV.

Today, IPOB have metamorphosed from a group to a movement of the Indegenious Biafran population who are fed up with the Nigerian depleting state. Biafrans all over the world have identified with the movement, thereby making IPOB to be a face of Biafra restoration movement.

But Okorocha, immediate past Governor of Imo State, now Senator representing Imo North, said he is yet to truly understand what the group is looking for.

Okorocha, who admitted knowing members of the organisation, added it is his duty to have a chat with them as a father.

He, however, said that they must convince him on why he must join IPOB and where it is taking Igbos to.

“In the first place, IPOB is not different from other similar groups from other parts of the country, but it is just the packaging and name that have always been the problem,” he was quoted by The Sun.

“I don’t know what we plan to achieve by isolating ourselves from the rest of the country. And until IPOB answers the question, the leaders might not know how to handle it.

“When you say IPOB, are they trying to call for another sovereign nation? If they want to use this as a way of correcting certain injustices meted to the Igbo, then they should change the name to start with.

“When Oduduwa, Arewa or Niger Delta youths talk, they don’t call for a sovereign nation. For Igbo to become a country of their own, they have to think about the consequences.

“Personally, I don’t think it is good for the Igbo to become isolated from other nations and tribes in this country.

“Although the young men may have grievances, they should package them properly for the world to understand what they are fighting for.

“The leaders seem to have kept quiet for too long. As our children, we need to guild them and let them know that they cannot be talking about sovereignty within a nation.

“What programme do they have in the first place? What has IPOB done about the Igbo killed in South Africa? Is it not surprising that they have not done anything?

“I challenge all the Igbo to return from South Africa, India and other parts of the world, converge on Onitsha market and let us see what will happen.

“I don’t think the Igbo need IPOB at this point; it is rather a distraction that is not good for our political future. It might be the reason we are not doing well politically, yet we are adding more danger to it.

“They are our children; we love them and need to bring them closer. So, it is the failure of leadership in Igboland that should be blamed. We are not showing good leadership to these boys.

“They are children and look at how they attacked Ekweremadu, but how have the attack or threat to other political leaders solved the problem of Igbo in Nigeria?

“How has it corrected the problem of marginalisation of Igbo in Nigeria? They are beating up people in the name of IPOB in Owerri, Aba and other towns, but how has that solved the problem?

“I think IPOB is rather waging war against ourselves which should not be. I am looking forward to meeting with them anytime to address this issue and if they convince me, I will follow them and if I convince them, they should follow me.

“Can we have a meeting where the Igbo will meet with these IPOB, MASSOB and those other associations to find a common ground because whether they are bad, good or evil, they are our brothers, children, sons and daughters?

“I cannot lay claim that I don’t know them because they are Igbo and it is my duty to have a chat with them as a father. They must convince me on why I must join IPOB and where it is taking us to.

“I have told them to join APC because through APC, Igbo man might become president and if they have contrary view, they can look for alternative. IPOB needs to explain where they want to take Ndigbo to.”

“We’ll never forgive those that killed our brothers”, Kanu says as IPOB observes a minute silence