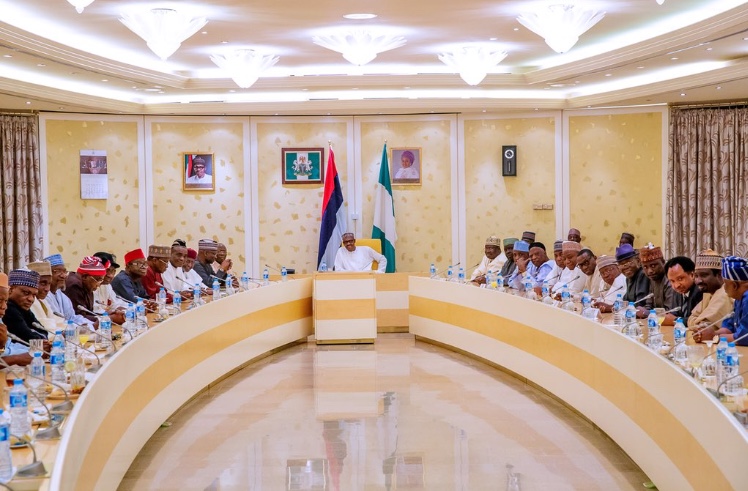 “So, we need to talk to our members in the Senate and impress it on them not to allow Saraki to impose his personal opinion on them.”

SAHARANEWS – All the members of the All Progressives Congress in the Senate has been summoned by President Buhari to a meeting at the Presidential Villa in Aso Rock, Abuja on Monday, January 28 (today) over the Chief Justice of Nigeria (CJN), Justice Onnoghen’s suspension.

SaharaNews reported that the Chief Justice of Nigeria (CJN), Justice Walter Samuel Onnoghen was suspended by President Muhammadu Buhari on Friday, January 25 based on an ex parte order granted by the Code of Conduct Tribunal (CCT).

Justice Onnoghen is currently facing a six counts of false assets declaration filed against him by the Code of Conduct Bureau (CCB).

Buhari’s meeting with the APC governors will take place ahead of the Senate emergency resumption on Tuesday (tomorrow) when decisions are expected to be taken on Chief Justice of Nigeria (CJN), Justice Walter Onnoghen’s suspension by President Muhammadu Buhari.

The All Progressive Congress (APC) senators’ meeting with the President would take a position to counter the expected condemnation of the CJN’s suspension by the members of the opposition in the Senate on Tuesday, January 29,Igbere Tv learnt.

However, the meeting which is going to hold at the Banquet Hall, is being tagged as a dinner. Invitations to the meeting were signed by the Director General of the APC Presidential Campaign Organisation, who is also the Minister of Transportation, Mr Rotimi Amaechi.

SaharaNews also gathered that the national leadership of the APC would also attend the meeting, apart from the senators and the APC leaders, some APC governors had also been invited to the meeting.

Our source said, “You know that the Senate leadership belongs to the main opposition party, the Peoples Democratic Party. The party on its own has taken a position on this matter.

“So, we need to talk to our members in the Senate and impress it on them not to allow Saraki to impose his personal opinion on them.”

APC Reps also to meet members of the APC Caucus in the House of Representatives have scheduled an emergency meeting for Monday, January 28 (today).

The Majority Leader, Mr Femi Gbajabiamila, called the meeting, according to a text message circulating among the lawmakers on Sunday.

The message read;
“Honourable colleagues, there will be a meeting of the APC caucus tomorrow, Monday, at 4pm. Venue is the White House Hearing Room 1. Thank you. Femi Gbajabiamila,”