I Remain Positive To Lead WTO Despite United States…

OPERATION PYTHON DANCE 111: Biafra Land Under Siege As Army Of Occupation Stall Activities In The South-East 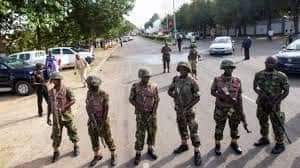 SAHARANEWS – With the kickoff of the ‘Operation Python Dance 111’ across Biafra land on Monday 19th August, 2019 the Nigeria Army has been deployed in all the nooks and crannies of Biafra land haunting for the innocent citizens of Biafra and the family members of IPOB who have committed no crime against humanity and the Federal Government of Nigeria.

A reliable source who spoke on the condition of anonymity shared his ugly experience with us on the treatment they encountered with the Nigeria Army on the early hours of Tuesday 20th August, 2019 along Enugu Abakaliki express road.

According to him, he boarded a mass transit from Abakaliki heading to Enugu for his business, on getting close to Enugu State the number of Army stop and checkpoints increased from what it was like before, surprisingly every check points they reached the army will stop and line up the road users especially the commercial transit and commence a thorough search on all the passengers including the drivers.

The most worrisome is that those with laptop computers and phones containing messages, pictures and videos pertaining to IPOB were mercilessly beaten before them by the Operation Python Dance soldiers on duty.

ALSO READ:  Residents on the edge as heavily armed troops patrol ahead of Anambra Election(VIDEO)

He also revealed that some of the victims were detained there and then and their phones and laptops seized after beating and torturing them like hardened criminals.

Recall that uncountable number of Biafrans including the family members of IPOB were killed and many injured as a result of the Operation Python Dance 1&2 which took place in the Biafra region between 2017 and 2018.

The Operation Python Dance Army brought by the South-East Governors on November 2018 invaded the home of Mazi Nnamdi Kanu and over 28 members of IPOB in the home of Nnamdi Kanu were killed and many sustained various degrees of gun injuries in the effort to kill the Supreme leader of IPOB Mazi Nnamdi Kanu.