OPINIONS: 2019 Elections May Trigger Off The Process Of…

Be Bold Enough To Admit You Cannot Handle Boko Haram,…

OPINION: “Christians Are Not Persecuted In Nigeria”: Blatant Lie By Sultan Of Sokoto 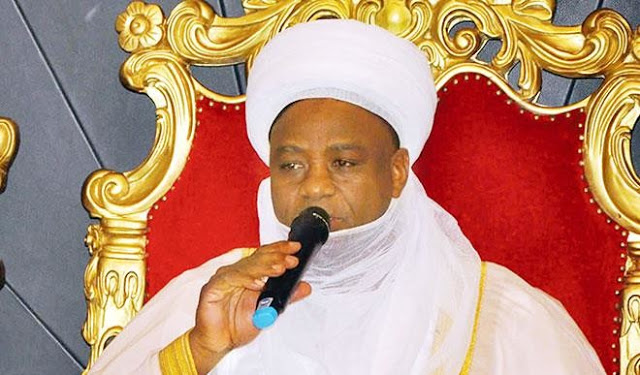 Sa’ad Abubakar III, the Sultan of Sokoto, Northern Nigeria, has in a statement credited to him, maintained that there exists apparently no agenda in the country to exterminate Christians. He made this declaration on Thursday 11th March 2020, during the first quarterly meeting of the Nigerian Inter-Religious Council (NIREC) in Abuja. This happens to be the greatest and most callous lie a personality of his status could peddle. Christians in Nigeria are relentlessly being mowed down with disgusting evidences littering everywhere. For a respected religious figure in the person of Sultan of Sokoto to publicly state that Christians are not being persecuted in Nigeria, is to say the least, disappointingly provocative.

The Sultan said and I quote: “It pains me when we gather at NIREC or other meetings and agree on measures that would promote religious peace, unity and tolerance but shortly after, you will begin to hear stories of persecution here and there. If we go out shouting, marching, dancing and singing that people of a particular religion are being persecuted and killed, you also forget that people of other religions are affected in the killings by the same enemies of the state”.

He continued in his devilish and grossly unguided lies by saying: “We have been reading and hearing reports about the persecution of Christians in Nigeria and I keep asking myself, how? Christians are being killed, Muslims are also being killed and they are all lives created by God. For me, there is no persecution of anybody in this country. If you can claim there is persecution of Christians in Nigeria, there would also be claims of persecution of Muslims but that would not solve the problem. People claim they are denied places to build mosques and churches in some parts of the country. But the right thing to do in such cases, is to approach relevant authorities and not to make claims of persecution. And the quotes could continue for the next hundred (100) years of things that have been done to Muslims but we usually approach relevant authorities in ways that we believe would bring solutions to the problems”.

ALSO READ:  Buhari Commends All Those That Delivered Bayelsa To APC, Tells The Unsatisfied To Go To Court

In the same vein, the Secretary to the Nigerian Government, Boss Mustapha stated that the claim of Christian persecution in Nigeria was a hoax by some religious leaders being made to curry public sympathy. He appealed to religious leaders to be circumspect and properly guided in their utterances, to avoid public incitement. In his words: “Nigeria has recently experienced several challenges including spike in banditry, insurgency, kidnappings, killings and drug abuse. It is time for a review of approach and strategy for improved results”.

In case Gideon Akaluka’s case may have been forgotten, these Islamic leaders need be adequately reminded. Gideon Akaluka, was a promising young Biafran of Igbo extraction, who was gruesomely murdered under the watchful eyes of Emir Sanusi Lamido Sanusi in Kano. His wife was accused by the Islamic fundamentalists, of using pages of koran as toilet paper for her baby. After Gideon was arrested and imprisoned by the police, a group of Muslim youths forcefully broke into the prison, killed him and magestically marched round the city of Kano, displaying publicly, his severed head. This was hoisted on a stick and paraded within the streets with, as a trophy by the mob, chanting victory songs. There was neither arrest of perpetrators nor justice done.

Sometime past, a Biafran kitchen utensils dealer, aged 74 years old from Imo State, Madam Bridget Agbahime, was brutally attacked and killed at Kofar Wambai market in the same Kano by a group of Muslim fanatics for blasphemy. According to reports, she was descended upon heavily and murdered on her refusal to allow a  Muslim man to say prayers in front of her shop.

ALSO READ:  HATE SPEECH BILL: If This Law Was In Place Between 2012-2014 Buhari And Lai Mohammed Won't Be Alive Today - Sen Abaribe, Fani-Kayode

Christianah Oluwasesin from the South-West was lynched by secondary school students in Gombe in the year 2007. She was accused of desecrating the Qur’an. She was an examination invigilating officer. These students were seen to have been involved in examination malpractices. They used the Qu’ran to facilitate the evil practice which she ceased from them.

Grace Ushang was raped and murdered in 2009 in Maiduguri for putting on khaki trousers that was issued to her by the Nigerian government for her National Youth Service (NYSC).

The heartwrenching case of Leah Sharibu who is yet missing till date is said to be in the captivity of Boko Haram terrorists while her Muslim school mate has long been released. Gideon Akaluka, Bridget Agbahime, Grace Ushang, Christianah Oluwasesin, amongst many others, were all gruesomely killed in broad day light. There has not been anyone brought to book as a result of their death.

The Sultan of Sokoto or Boss Mustapha therefore, should name one Muslim that has been harassed ordinarily on any part of Eastern Nigeria since the creation of the British concocted enclave till date.

CORONAVIRUS: Black Friday In Italy As Over 626 Dies Within 24 Hours, Highest Single Day Deaths In The World