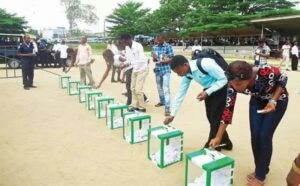 SAHARANEWS —AN election observer GROUP, the Centre for Transparency Advocacy, CTA has sued for peace among politicians and interest groups following blame games trailing the last-minute’s postponement of the Presidential and National Assembly Elections,on Saturday.

This was even as it charged the Independent National Electoral Commission,INEC,to ensure that the rescheduled date for the elections remain sacrosanct.

The election accredited observer group, insisted that it was better that the election was postponed than for the country to have witnessed what it called an “inconclusive election conducted by the Independent National Electoral Commission,INEC.”

ALSO READ:  JUST IN: Osinbajo Is An Embarrassment, Should Be Stripped Of SAN Title – Fayose

It,however, said the shift in election dates just five hours to the opening of polls was not good enough for Nigeria,given the implications on the economy and citizens’ resources as well as time.

Speaking at a press conference,in Abuja, the acting Executive Director,Faith Nwadishi,commended INEC,for the action, saying it would guarantee free, fair and credible exercise.

“Citizens and Nigerians should give INEC the benefit of doubts as we continue to trust that the shift was done in good faith and ultimately, for a free,fair and credible elections.

“INEC therefore should be more circumspect and pro-active in managing her logistics challenges. We call on INEC to stick to the new election time table while putting her house in order,”it however said.

Even as it noted that the development was a setback for the INEC,civil society organisations and citizens who have invested time and resources to make the election happened,CTA insisted that the rescheduled election would guarantee a free, fair and credible exercise.

Breaking: US, UK, EU, Others Mount Pressure on Buhari Over Moves to Bring In Aisha Zakari As INEC Chairman