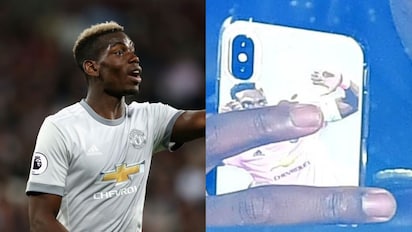 Manchester United superstar Paul Pogba flaunts his phone case which has his picture at the back on his arrival at the club training. The World Cup winning midfielder was said to have missed the Red Devils session on Friday following a slight injury he suffered. A report which cast a doubt on his availability for their Premier League clash against city rivals Manchester City on Sunday.

Daily Mail however report that the the 25-year-old participated in United’s training on Saturday morning to hand Jose Mourinho a boost ahead of the big game.

Daily Mail however report that the the 25-year-old participated in United’s training on Saturday morning to hand Jose Mourinho a boost ahead of the big game.

Pogba looked calm and ready for the game when he arrived at the club’s Carrington base in a chauffeur driven Rolls Royce.

Meanwhile, he will undergo a late fitness test ahead of Sunday’s fixture, along with striker Romelu Lukaku.

The France international was critical to his side’s dramatic 2-1 comeback victory over Juventus in the Champions League. But they face a City side that are yet to taste defeat in the Premier League this so far this season.

United slammed £200 million price tag on the former Juventus star with his relationship with Jose Mourinho deteriorating every day.

China Threatens To” Take Actions” If US Declare Boycott the Olympics