‘Northern Nigeria is under serious siege’ —…

Nigeria, Now One Of The Most Dangerous Places To Live, UN…

Rivers State women gathers for prayers for Biafra and Nnamdi… 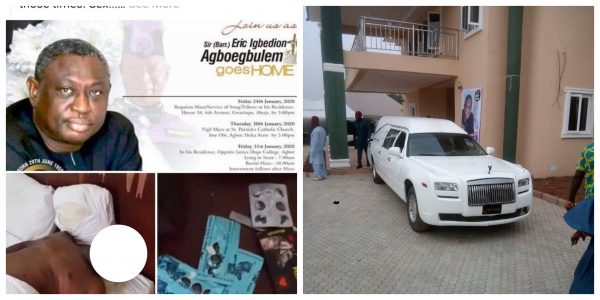 SAHARANEWS – The burial photos of man who allegedly died while having s£x with a prostitute have emerged on the internet, and it looked like the family honored their father with a lavish burial.

Some days ago, a video surfaced on social media and a man could be seen lying lifeless on a hotel bed. He was reported to have died after allegedly consuming some s£x-enhancing drugs.

In the video, the prostitute was being questioned by some men who appeared to be police detectives. She revealed that the man had requested for her service the night before his death.

According to her, they got intimate in the early hours of that day, after which she claimed he wasn’t responding when she was about leaving.

A new report on social media however established that the man was a knight in his church and the incident happened in 2019.

According to the report, the family of the deceased are bent on sending the girl to jail accusing her of being responsible for the death of the man.

The video was allegedly released to pressurize the family to drop the case against the prostitute, as some evidences in the video showed that the man probably died as a result of drugs overdose.

“I’ve Kept My Promise, We Have Made Remarkable Progress In Ending Boko Haram” – Buhari