BREAKING: National Identity Number Will Be Made Compulsory…

POLICE AND IPOB IN EBONYI: “IPOB Attacked Us With Stones, If Not For The Bulletproof Vests And Helmets One Of Us Would Have Been Dead By Now” – Nigerian Police 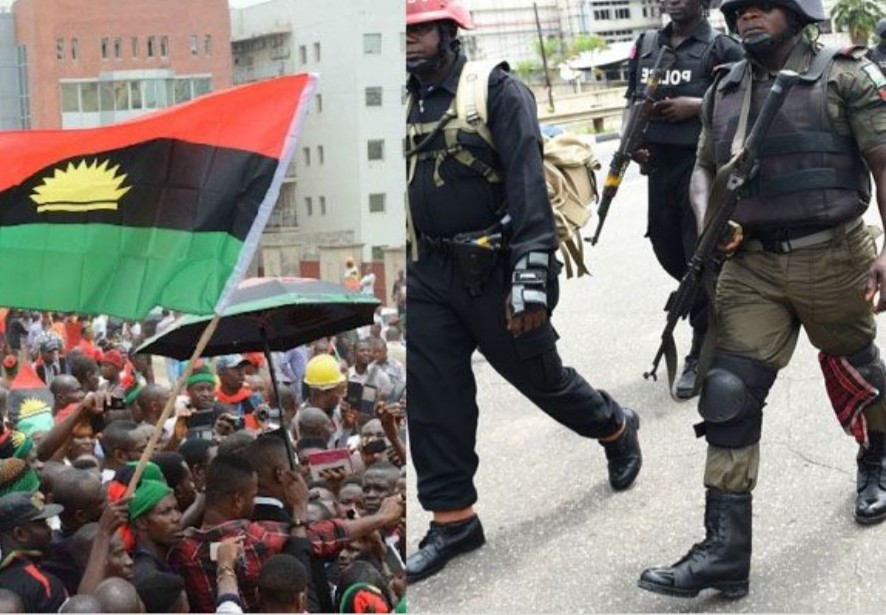 SAHARANEWS – The Indigenous People of Biafra, IPOB, on Tuesday alleged that 17 of its members sustained gunshot injuries when they were attacked by a combined team of security agencies on Sunday in Ebonyi State.

But the Police debunked the allegations stating that it arrested just six members of the group in a primary school in the state.

This is as a Divisional Police Officer (DPO) of Kpirikpiri Police Division, CSP John John, was attacked when members of the group and security agents clashed during the operation.

IPOB members were said to been having their convention in the school when the police got wind of it and stormed the area.

This led to a bloody clash between the security agents and the proscribed group.

The DPO, John, who was attacked with stones and other dangerous weapons, is said to be nursing injuries he sustained in the melee.

However, the police arrested an Abakaliki based legal practitioner, Mr. Orogwu Cyril Ndubuisi, and his fiancé, who were said to be with the IPOB members during their meeting in the school.

Five other IPOB members were also arrested while many of the members fled.

Ndubuisi and his fiancé, whose name could not be immediately ascertained, are planning to wed on December 12, 2019.

They reportedly took their wedding invitation card to IPOB members for distribution during the meeting.

Police spokesman in the state, Loveth Odah, said the IPOB members started attacking the security agents immediately they sighted them.

The spokesman said the IPOB member hit John with heavy stones on the head.

She added that he would have died but for the helmet he was wearing and bulletproof vest he also wore.

She said: “Why are they saying police burst into where they were holding meeting? Are they supposed to hold a meeting in Nigeria when they are proscribed? In law, there is what is called an unlawful assembly”

“Members of Indigenous People of Biafra (IPOB) assembled unlawfully and the information got to us that was on October 27, 2019 at Oguzoronweya Primary School in Ebonyi Local Government Area of Ebonyi State by 2.50p.m”.

“On receiving the information, men of Operation Puff Adder of our command, in active collaboration of other security agencies, went to the place.

“We thought that IPOB members were just normal people that gathered together to have unlawful meeting even when they know they are not lawful in Nigeria. But that was very different. As soon as police got to the area, to their greatest surprise, Mr. John John, the DPO of Kpirikpiri Division, was seriously attacked.

“If not because he was seriously kitted as a policeman having his helmet on him and his bulletproof, he would have been killed. By now you would have just heard that a Chief Superintendent of Police is dead.

“Their lawyer, who was with the IPOB members, was arrested. I talked with him and I was surprised that he denied being their legal adviser. He said he was taking their briefs. I don’t know the difference between a legal adviser and somebody who takes a brief for an organisation”

“Many of them ran away but we were able to arrest at least six of them; they are in custody. They are fully dressed in IPOB uniform.”

But IPOB in a statement claimed security agencies opened fire on them injuring 17 of its members.

A statement by the Spokesman of the group, Emma Powerful said that 70 others were arrested by the security agencies.

“We the global family of the Indigenous People of Biafra (IPOB) find it distasteful that rather than confront rampaging and murderous Fulani herdsmen, the Nigerian army and police have continued their incessant and unwarranted attacks against the peaceful family of IPOB in Ebonyi State”

“A combined team of Nigeria Armed Forces invaded the venue of a peaceful IPOB gathering in Ebonyi LGA at 5pm on Sunday 27 October 2019 with more than 50 Hilux vans during an inauguration ceremony and opened fire on defenceless mothers and fathers without warning.

“Such mindless and animalistic brutality cannot happen and has never happened in the north where the top four most deadly terror groups are operating freely without restriction.

Mr Powerful noted that if the same murderous zeal exhibited by the Nigerian Army and police in Ebonyi can be exhibited in the fight against terrorism, banditry and lawlessness in the north, peace and tranquility will reign.

“The continued killing of innocent civilians in Ebonyi State by terror herdsmen on one hand and Nigerian army on the other is troubling.

“This continued invasion and intimidation of Biafraland must stop. All those responsible for this attack will pay dearly for it, they and their children,” Powerful added.

Spokesman of the Army, Musa Sagir did not respond to requests for reaction at the time of the report.

(VIDEO) Lady Who Claimed To Be Pregnant For Davido, Arrested With Accomplice