SECRET EXPOSED:Buhari’ll Be Removed If His Government Kills…

POLITICS: You have failed the Igbos – MASSOB attacks Ekweremadu 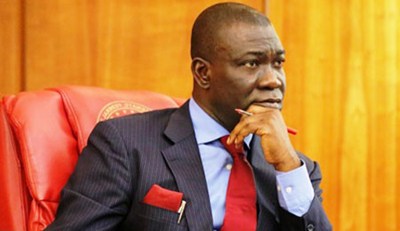 THE Movement for the Actualization of the Sovereign State of Biafra (MASSOB) has accused the deputy senate president, Senator Ike Ekweremadu of not using his lofty political position to enhance the political and economic situation in Igbo land.

Deputy MASSOB leader, Mazi Ikechukwu Ekwe in a statement Tuesday accused Ekweremadu of allowing his personal ambition and political ego to undermine the collective interest of the people, alleging that the senator had suddenly started canvassing for Igbo presidency 2023 because he lost out in the race for the vice presidential ticket of the Peoples Democratic Party, PDP.

He said: “We frown at the lukewarm and nonchalant attitude of the current highest Igbo political office holder, who has not utilized the opportunity and government access legally and constitutionally attached to his office as deputy senate president towards attracting fair and just betterment of the people.

“How can MASSOB and other pro Biafra groups that have thousands of block votes, grass root support base and massive people- oriented command, support or vote for Igbo political office seekers into the National Assembly, state Assembly and as state governors, when people like Ike Ekweremadu and his Igbo colleagues in the National Assembly are mere political errand men to our oppressors?

“MASSOB wishes to remind our people that Ike Ekweremadu, as the chairman of senate committee of constitutional review and amendment, has not deemed it fit as chairman of the highest committee and as deputy senate president, to push or influence an additional state to South East or influence the insertion of political referendum into the Nigerian constitution or push for massive infrastructural development of Eastern Nigeria.

JUBRIL: Once again Nnamdi is Kanu Vindicated, Buhari confirmed that he is NOW right handed.

POLITICS: 2019 is a referendum for poverty, insecurity and deprivation – Dogara