Soludo appoints Bianca, others to dialogue with IPOB, stop…

Nothing Wrong In Granting Amnesty To Boko Haram Terrorists,… 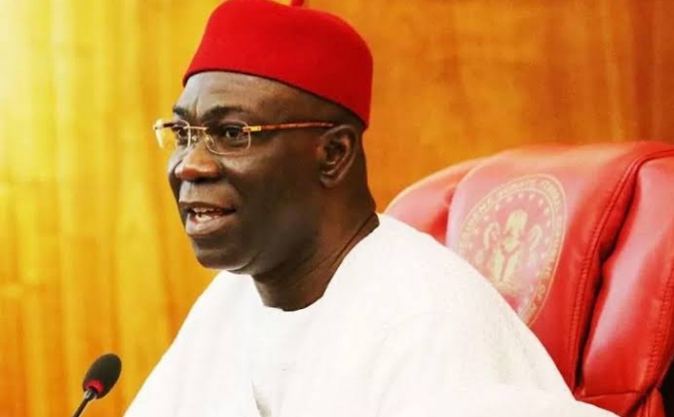 SAHARANEWS – The Deputy President of the Senate, Senator Ike Ekweremadu, has written President Muhammadu Buhari urging him to go the way of dialogue and call off the ongoing Operation Python Dance in South East to avoid the kind of tension that could degenerate to full scale civil war.

Ekweremadu, the highest elected political office holder from the Southeast nevertheless restated his full commitment to the territorial integrity of the country and the way of peace.

In the letter entitled “Rising Tension in the South East: Re: Appeal to Call Off Operation Egwu Eke” and dated Thursday, 14th September, Ekweremadu said he was compelled by the rising tension in the South East occasioned by Operation Python Dance and the dangers to the nationhood inherent in it to appeal to the President “to take immediate steps to avert another civil war in Nigeria”.

The five-page letter read in part: “The peace of Nigeria has never been this fragile since the end of the civil war and as leaders we must do everything humanly possible and legitimate to hold the nation together in peace and prosperity.

“As President and Commander-in-Chief, you would agree with me that there is need for caution.
“Recall, Your Excellency, that the South East Caucus of the Senate met with you on November 9, 2016. We had a heart-to-heart discussion on pressing issues affecting the South East. Recall that on the issue of the leader of the Indigenous People of Biafra (IPOB), Mr. Nnamdi Kanu, who was then in detention, we pleaded for your intervention and strongly advised against his continued detention. We were of the view that his continued detention would only further popularise, and in fact make him a hero.

“Furthermore, we informed you that when the leader of the Movement for the Actualisation of the Sovereign State of Biafra (MASSOB), Chief Ralph Uwazuruike, was detained during the administration of late President Umar Musa Yar’Adua, we approached the former President and appealed to him to immediately release Chief Uwazuruike to avoid creating a mountain out of a molehill. He heeded the advice and Chief Uwazuruike and MASSOB have never posed any threat to the peace and sovereignty of Nigeria ever after.

“I recall, however, that on the appeal for the release of Nnamdi Kanu, you told us to allow the judicial process to run its cause.

“But, in retrospect, it proved to be a big mistake on the side of government as his continued detention made him a hero among a cross-section of the people”.

“I am afraid, Your Excellency, that the government is embarking on yet another huge misjudgment today by adopting a military option to the Nnamdi Kanu and IPOB challenge.

“Therefore, I most respectfully appeal to you to order the immediate withdrawal of the military from the South East as their presence can only and is indeed already amplifying tension in the region”.

Ekweremadu warned that reactions by the youths to military presence could be unpredictable and irrational, thereby triggering off other reactions in other parts of the country that could lead to a conflagration of crisis.

“As things stand, the reaction of the youth in the region is unpredictable. It is also possible that their reactions and actions of the military may be misrepresented or exaggerated on the social media and trigger a chain of other actions in other parts of the country also.

“Not even Your Excellency or anyone else for that matter can certainly foretell the outcome of such chain of actions, reactions, and reprisals. But at least, you are in a position to imagine the number of the avoidable casualties and deaths”, he explained.

Going further, he wrote: “ Your Excellency, you were an active participant in the civil war. With the benefits of your age, experience, exposure and present position as the President of this great nation, I know you would not wish any part of Nigeria to go through that experience again.

“I appeal to you to use these benefits to avert any descent into the 1967 – 1970 experience. It is obvious to all of us that the wounds of that war are yet to heal. Therefore, as President, duty calls on you to not only ensure that the wounds fully heal, but also that they do not reoccur.

“By the provisions of Section 215 (3) of the 1999 Constitution on the powers of the President to deploy the police for the maintenance and securing of public safety and public order as well as Section 217 (2)(c) on the deployment of the armed forces to quell insurrection, I do not believe that the IPOB issue, as it is today, deserves military solution. We must objectively differentiate civil disobedience, displeasing as it is, from insurrection or mutiny.

“As a General, you would agree with me that the armed forces are not trained to contain civil disobedience or civil protest. Therefore, deploying soldiers in the present circumstance is like using fuel to quench candlelight. I am very worried that our armed forces that are already heavily stretched are being saddled with the responsibilities outside their primary constitutional duties. As a lawyer, let me most respectfully point out that the courts have severally frowned at the deployment of soldiers in circumstances as we presently have in the South East, describing it as totally unconstitutional.

“Besides, let us be mindful that it was the mishandling of the Boko Haram sect, especially the elimination of its leader, Mohammed Yusuf that escalated into the full-blown insurgency we have in the North East for many years now. That singular misadventure has led to wanton destruction of lives and property, Nigerians and foreigners alike, in the North East in particular and other parts of the country as well. It has affected both the Federal Government and the international community financially, with monumental resources that should have gone into development now channeled into containing the Boko Haram menace.

“Military option did not also work in the Niger Delta. It will certainly not work in the South East. As was the case in the Niger Delta, dialogue is the best option.
“With the benefit of the hindsight, therefore, it is my hope that you will heed my humble advice to withdraw the troops lest we unwittingly find ourselves in the same circumstance as we have in the North East.

Ekweremadu, who is a strong proponent of a united, but restructured Nigeria, advised the President to follow up on the dialogue initiated by the Vice President, Prof. Yemi Osibanjo, who met with South East leaders- the Governors, members of the National Assembly, Ohanaeze Ndigbo, clergy, traditional rulers, civil society, elder statesmen, and political leaders- in his capacity as the Acting President while the President was on medical leave overseas.

ALSO READ:  BBC News Africa will not report the kidnappings & killings of Biafrans by Fulani terrorists with active support of Nigeria Govt.

He added: “As a quick win, the position of these leaders was that the Federal Government should, in the meantime, do more in giving the South East a sense of belonging by addressing the palpable marginalization and exclusion of the region to diffuse the growing disenchantment with the Nigerian project and sentiments for Nnamdi Kanu’s position and message.

“Your Excellency would recall that it was exactly the same suggestion earlier adduced by the South East Senate Caucus during the November 2016 meeting with you. We especially appealed to you to address the total exclusion of the entire South East region in the headship and commanding heights of nation’s security agencies and organs. Although you promised to address this anomaly, this, regrettably, has not happened.

“Furthermore, I have it on good authority that the security chiefs also advised along the line of giving the South East a sense of belonging by way of appointments and infrastructural development. Regrettably, that advice is yet to be implemented”.

“Your Excellency, between 1967 and now is well over 50 years. As a seasoned soldier, you would agree with me that the character of war has changed dramatically. Therefore, the outcome of another war in any part of Nigeria, God forbid, will be unpredictable.

“By God’s grace, you are back and fully recovered now. I would like to advise that you meet with the leaders of the South East to continue with the dialogue as soon as you get the military deployed to the South East to return to their barracks.

“I speak for myself and other leaders of the South East that we will make ourselves available towards finding political solutions to the agitations in the region. In the meantime, be assured that the South East leaders are already taking the necessary steps to ensure that the situation does not escalate”, he concluded.