BREAKING:Cattle Dealers Dissociate Self From Smuggling… 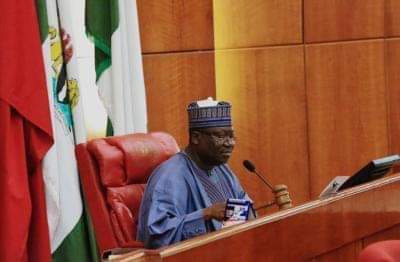 SAHARANEWS – The proposed National Agency for the Education, Rehabilitation, De-radicalisation and Integration of Repentant Insurgents in Nigeria’ will get its funding from the Universal Basic Education Commission and the Tertiary Education Trust Fund.

Other sources of funding include- donations, grants, annual subventions from the government and counterpart funding from the six North-East states of Borno, Bauchi, Yobe, Adamawa, Taraba and Gombe.

The details are included in the bill which was obtained by The PUNCH on Thursday.

The controversial bill, which is officially known as ‘A Bill for the Establishment of the National Agency for the Education, Rehabilitation, De-radicalisation and Integration of Repentant Insurgents in Nigeria and for Other Connected Purposes’, passed the first reading in the Senate on Thursday last week.

But few hours after the bill, which was sponsored by Senator representing Yobe East, Ibrahim Geideam, passed the first reading, it attracted angry reactions from the Chibok Community, which was attacked by the insurgents in 2014, and the Christian Association of Nigeria.

Also, the #BringBackOurGirls movement, which has been calling for the release of schoolgirls abducted from Chibok in 2014 by the insurgents, said the plan to set up the agency should be done concurrently with the rehabilitation of thousands of internally displaced persons.

But on Monday, Geidam, in an interview with journalists, defended the bill. He said many Boko Haram terrorists were willing to lay down their arms but were afraid of the consequences of their action.

The senator explained that his bill was not meant to take care of insurgents captured by the security agencies because those ones would be made to face the full wrath of the law.

Barely two days after the senator defended the controversial bill, 25 Boko Haram members and their wives, who surrendered to troops in Niger Republic, arrived in Maiduguri, the Borno State capital, on Wednesday.

A copy of the bill on the agency for Boko Haram repentant terrorists, obtained by our correspondent, states that one per cent of TETFund and UBEC fund will be used in funding the agency for rehabilitating the terrorists.

The agency will also be funded by 0.5 per cent of the federal allocation of the six North-East states.

The PUNCH reports that TETFund obtains its funding from a compulsory two per cent profit tax that is paid by all registered companies to the Federal Government.

Section 10 of the controversial bill reads in part, “The agency shall establish and maintain a fund which will consist of initial take-off grant from the Federal Government; annual subvention from the government; states counterpart funding which will be deducted at source at 0.5 per cent of their statutory allocation; 1 per cent of the Education Tax Fund (TETFund) and UBEC fund.

According to the proposed law, the agency will also be funded by grants in aid, gift, testamentary dispositions, endowments and donations.

The bill states that the proposed agency shall have a governing board which shall consist of the chairman who is to be appointed by the President in consultation with the National Assembly.

The council will also include one representative each from the federal ministries of humanitarian affairs, finance, environment, petroleum resources, North-East Development Commission and the Local Content Board.

As regards the powers of the proposed agency, the bill gives repentant terrorists the opportunity of receiving foreign education.

Section 5(m) reads in part, “(The agency shall) implement programmes geared towards the rehabilitation of beneficiaries, engage the services of offshore and Nigerian institutions in the pursuit of the educational needs of ex-agitators.”

The proposed agency is expected to implement a comprehensive programme in the area of disarmament, demobilisation, rehabilitation and reintegration.

It will also coordinate efforts of relevant agencies, organisations and institutions towards the attainment of set objectives as regards job placement, internship and sustainable reintegration.

A civil society organisation, Centre for Anti-Corruption and Open Leadership, knocked the Federal Government over its plans to deduct from TETFund and UBEC’s funds for the rehabilitation of the Boko Haram terrorists.

The CACOL Director, Mr Debo Adeniran, said the education sector was already underfunded and the Federal Government must rather seek ways to increase funding and not deduct for the terrorists’ rehabilitation.

He said, “I will say straightaway that it is not right and it will be criminal if anyone dips his hands into education funds of whatever description to fund the rehabilitation of the Boko Haram.”

The Chairman, Medical and Dental Consultants’ Association of Nigeria, University College Hospital, University of Ibadan branch, Dr. Dare Olulana, in an interview with The PUNCH, said should not use part of TETFund for the agency.

Olulana, who recalled that the Academic Staff Union of Universities had toiled and suffered by engaging in protests and strike actions before TETFund was approved, said it would be unfair and gross misplacement of priority for the current administration to divert the money meant for the funding of tertiary education in the country. (Punch)

JUST IN: (VIDEO) Swearing In Public Officials With Juju Will Stop Corruptions In Nigeria – Senator Okorocha