How Nnamdi Kanu was kidnapped and illegally repatriated to… 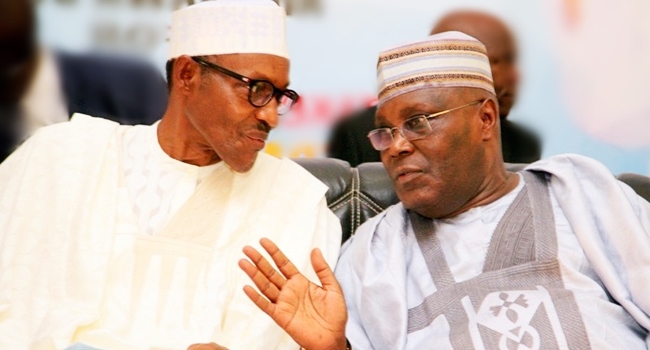 The presidential candidate of the Peoples Democratic Party, Atiku Abubakar, has called on President Muhammadu Buhari to resign for admitting on Friday that the nation’s economy was in bad shape.

Buhari reportedly made the confession during his meeting with the 36 governors at the Presidential Villa, Abuja, on Friday.

In a statement by his Special Assistant on Public Communication, Mr Phrank Shaibu, on Sunday, Atiku said the President’s confession that the economy was in bad shape was not only a ploy to attract the sympathy of Nigerians but also aimed at getting a soft landing.

He said, “The result, of course, is his confession of failure on the eve of our general elections in the hope that millions of Nigerians, whom he has condemned to poverty and hardship, will give him a clap for failing abysmally.

“I dare say that President Buhar has miscalculated badly on this matter because Nigerians are simply fed up with him.

“The economy has collapsed under his watch and he has by this frank remark admitted that he has no idea on how to fix it and that is why he summoned the governors to help him.

“This is really very sad because President Buhari has run out of time and what Nigerians need now is leadership which has the political will, administrative experience and sound economic acumen to get Nigeria working again.”

The former Vice-President expressed his disappointment that Buhari had continued to blame the PDP for the country’s bad economy, saying the President had reportedly confirmed that he was incapable of fixing the economy.

Atiku said Buhari should step down from his position since the economy was in bad shape.
He said Buhari’s admission had confirmed the British multinational bank HSBC’s prediction that re-electing him in 2019 could plunge Nigeria into a deeper economic hardship

Atiku said, “Unless those in charge of the APC and the party’s supporters are, as usual, suffering from some form of self-delusion, it just does not make any sense for them to say that the All Progressives Congress’ Federal Government has brought succour to ordinary Nigerians when President Buhari himself has admitted to the governors that the economy has gone beyond his control.

“Or do we need a prophet to tell us that the President’s admission is a vindication of our long-held position, and indeed the forecast by HSBC recently cited by the Nigerian media where the bank said a second term for Buhari would greatly affect the economy of the country?”

He added, “The exchange rate of the naira to the US dollar when the APC assumed office in 2015 was about N170 (official rate) to $1. Today it is N360 to $1. Today millions of Nigerians, most of them youths, are unemployed, forcing them to become professional beggars who wait for the FG’s monthly N5,000 handout and N10,000 Tradermoni aimed at bribing them to re-elect the party in the forthcoming elections.

“Power generation has actually dipped from 4,949 megawatts, which the PDP left in 2015 to less than 3,500 megawatts even though Buhari’s managers consistently claim that 7,000 megawatts are what the country is currently generating. What more evidence do we need to know that the APC has been a curse rather than a blessing to our country?”

Atiku lamented that the President had failed to apply new methods in addressing the challenges facing the country.

He said, “Our President is still living in the Paleolithic age of blame game and buck-passing as responsible for his failures.

“What this simply means is that President Buhari was not really prepared for governance and did not even understand the simplest intricacies of running a national economy as big as Nigeria.

“This is really tragic and it is obvious that President Buhari has come to the end of the road and has completely given up on the next steps to advance Nigeria, while those who his dear wife openly declared misled his administration into this economic quagmire are still drumming up support for his next level of more hardship, suffering, unprovoked deaths as a result of mis-governance.”

He said the President was tired and should, therefore, be asked to return “to his much cherished sedentary, pastoral and rustic lifestyle in his country home in Daura and then leave the rigours and highly strategic art of governance to those who know how to govern and get the economy working again.”

But the Special Adviser to the President on Media and Publicity, Mr Femi Adesina, said he would not comment on the issue.

He referred The PUNCH to the spokesman for the APC, Lanre Issa-Onilu.

Adesina said, “I don’t respond to PDP issues. Whenever it is the PDP, talk to the APC. Journalists should know this.”

When reminded that the question was on Atiku’s call for Buhari to resign for admitting that the economy was in bad shape, Adesina said he would not talk.

When one of our correspondents got across to Issa-Onilu, he also directed him (the correspondent) to spokesman for the President Muhammadu Buhari Campaign Organisation, Mr. Festus Keyamo (SAN).

However, calls made to the telephone of Keyamo were not answered.

He also did not respond to a text message sent to him as of the time of filing this report.