Restructuring is not the solution to Nigeria’s problems — Yoruba elders 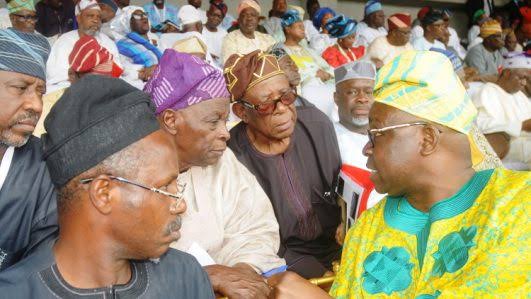 Yoruba Council of Elders, YCE, yesterday, said restructuring alone could not effectively tackle the country’s problems noting that time has come for the various ethnic groups in the country to have a round table talk on how to live together.

The Secretary-General of YCE, Dr Kunle Olajide, who spoke on the state of affairs in the country, said: “They should get a new constitution for this country. It’s not anything difficult. We are in a democracy. Let the executive send bills to the national assembly for imputing referendum into our constitution. A referendum is not in the constitution we are operating.”

His words: “There should be a referendum in any democratic dispensation. They should establish constituents’ assembly commission. We cannot run Nigeria as a unitary system. Reforming a country is a process, you cannot decree a nation into existence.

“Emphasis must be placed more on getting a people’s constitution. This is a heterogeneous country. We are made up of different people with different histories, different backgrounds, different cultures and different priorities.

Therefore, we must sit down together. We have several nations in Nigeria. We have the Yoruba nation, we have Igbo nation, Fulani nation, Hausa nation, Kanuri nation, Ijaw nation and so on with different priorities. Let us sit down and agree on how to live together.

“I am not particularly happy with the happenings in this country. We started this dispensation in 1999 and it appears as if we take three steps forward and take about ten backwards.

In my humble opinion, the simple reason is that we were not part of writing the constitution we are operating. If you recall, there are several contradictions even in the constitution that we are running.

“The land belongs to the state; the minerals on the land belong to the Federal Government. Everything is controlled from the centre. The states are not even empowered to explore and exploit their resources and deploy them according to their priorities.

They go cap in hand every month to Abuja for allocation and about 85 percent of the revenue of the country is from oil and gas which is dangerous for the country’s economy. The prices of these products are controlled from abroad, whereas we have enough land for agriculture.”