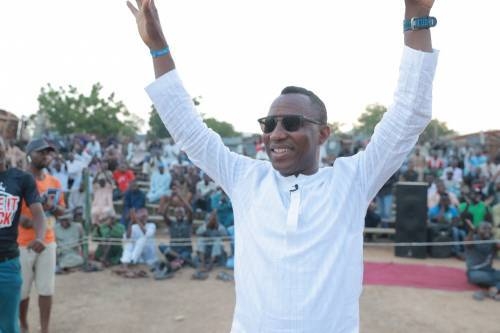 SAHARANEWS – The Federal High Court on Monday in Abuja partially reduced the conditions of the bail it granted the human rights activist, Omoyele Sowore.

The court presided over by Justice Ijeoma Ojukwu had on October 4 granted bail to the activist but with stringent conditions.

Sowore and his co-defendant, Olawale Bakare were unable to meet the conditions attached and since then remained in the custody of the Department of State Services.

The activists through their lawyer, Femi Falana, applied for the variation of the terms and asked the court for leniency.

The judge set aside the previous conditions of N50 million security deposit by one of the sureties and also reduced the N50 million bail of the second defendant, Bakare, to N20 million while their conditions remained.

She said the court has the right to grant bail and may be reviewed when the need arises.

At the resumed hearing of the case on Monday, Falana asked the court to vary the bail conditions saying that anybody who is on bail should not have his rights violated.

He added that the conditions attached to Sowore’s bail were tantamount to giving bail with one hand and collect it with another hand.

Falana said Sowore needed to visit his family and he is a teacher in one of the United States of America.

ALSO READ:  BREAKING: It's A Shame That After Selling Oil For 64yrs, FG Could Not Feed Nigerians For 2 Weeks - Sen. Dino Melaye

The prosecution counsel, Hassan Liman objected to the application for a variation on the ground that the offence brought against the defendant bordered on national security.

The court adjourned the case until November 6 and 7 for accelerated hearing.