BREAKING IPOB Reacts To Attack On Members By South African…

BREAKING: “Don’t Be The Killer Or Destroyer Of… 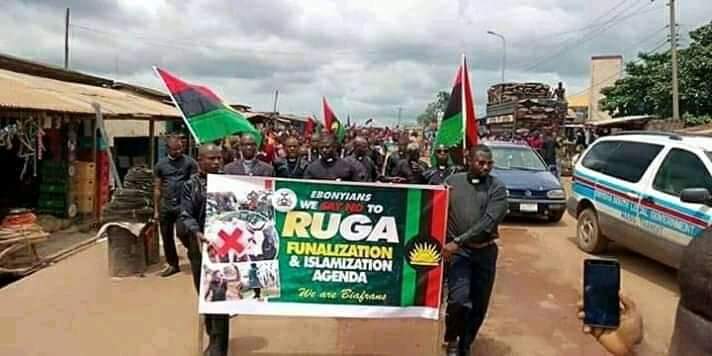 The last is definitely not yet heard about the sinister motivate of Governor Dave Umahi of Ebonyi State, to mortgage the future of Ebonyi people in his untamed desperation to massage the interest of his Fulani slavemasters. Ongoing developments in the State vividly indicate that he is strongly insisting on donating the people’s ancestral lands to the Nigerian government for the implementation of Ruga Initiative in Ebonyi State.

Undercover Intelligence surveillance recently uncovered a sinister plot of the Ebonyi State Government’s preparedness to give out large chunk of land belonging to Isu-Okoma in Onicha local government area in old Ohaozara, for Ruga purposes. The information has it that Governor Dave Umahi’s agents have been paying visits to the traditional rulers of the indigenous communities whose lands are affected with handsome monetary inducements.

It is however important at this juncture, to clearly notify the Ebonyi State government in general and Governor Dave Umahi in particular, that the entire Isu-Okoma ancestral lands accommodate the remains of all the dead indigenes of the community. Further revelations gathered by the correspondent of Family Writers Press International, who visited the community, Isu-Okoma is an ancient town in Ohaozara which consists of seven communities which include: Agba-Ebo, Isu-Achara, Mgbalaeze, Amanator and Mgbanukwu.

Further enquiries proved that the primogenitor of Isu-Okoma is a patriarch known as Ntumoke Ugota who left his then native land of Isu-Ikwuato to sojourned in Isu-Okoma territory till date, thereby becoming the great grandfather of the entire indigenous Isu community. From the very days of patriarchal stool of Ntumoke Ugota, all the ancestral Isu people have been exclusively buried in Isu land.

The indigenes of Isu-Okoma therefore hold very tenaciously, their ancestral lands because there remains the only burial ground for their ancestors. Any attempt by anyone to cede an inch of the land to the nomadic aliens from the Sahel, for Ruga purposes or whatsoever, is not only just committing sacrilege but desecrating their ancestral inheritance. This will tantamount to the highest level of mockery of the people’s ancestors buried in Isu for years.

ALSO READ:  Make money before you marry because no woman loves a poor man — Pastor Ibiyeomie

Governor Dave Umahi, a native of Uburu, in the same Ohaozara, should not in any way feign ignorance of the importance of ancestral lands as well as the inherent dangers associated with their desecration within Ohaozara in entirety. If there be anything that has the potentiality of bringing perpetual curses upon the people of Isu presently, it is surrendering any part of their ancestral heritage for the habitation/occupation of a band of cultureless cum vampiric aliens in the guise of running a Ruga program and all the likes. One of the custodians of the cultural heritage in Isu town, in an interview with Family Writers Press International, revealed that there existed communal wars that lasted for ninety seven (97) good years from 1910 to 2007. It was between Isu people and Ezza Ogbooji indigenous inhabitants when the neighboring Ezza people forcefully wanted to encroach into Isu land. He reiterated that many Isu youths laid down their lives during those years of hostilities just to ensure that their ancestral lands remained intact.

The present crop of Isu youths are very much prepared to defend their inheritance even at the price of their lives. They will never ever allow the invasion of their lands which is their pride, under whatever guise, by external forces or their associates. It is noteworthy to state here therefore, that the Ebonyi State government should clearly stay off from tampering with the ancestral lands of the people as doing so, is tantamount to sacrilegious crime against the ancients whom the people revere. A stitch in time they say, saves nine.