Nnamdi Kanu: US lawyer to drag Nigerian govt to… 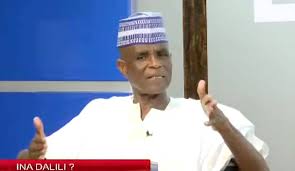 A chieftain of the ruling All Progressives Congress (APC), Dr. Garus Gololo, has called on President Muhammad Buhari to continue with the overhauling of the security architecture of the country by relieving his National Security Adviser, Gen. Babagana Munguno (retd) of his duties.

The APC stalwart also called for the sacking of the Secretary to the Government of the Federation (SGF), Mr. Boss Mustapha, and all the serving members of the Federal Executive Council, to get Nigeria off the current rating among most corrupt nations in the world.

The Transparency International’s Corruption Perception Index recently placed Nigeria as number two most corrupt nation in West Africa and number 149 out of the 180 countries sampled across the world.

At a press briefing in Abuja Friday, Gololo commended Buhari for relieving the nation’s service chiefs of their duties but added, “However, the story will still be the same with Gen. Munguno still the National Security Adviser. He should be replaced so we have a clean slate in the system. He is from Borno State with Gen. Yusuf Buratai, the North-East, where Boko Haram insurgency is prevalent, yet, he could not achieve anything.

“The office of NSA is purely to gather intelligence and also proffer possible ways of getting the nation out of security quagmire. Munguno has shown that he lacks such intelligent capacity over time. Keeping him there would undermine the genuine efforts of the new Service Chiefs,” Gololo warned.

On the possible way of getting the country to be less corrupt and regain international confidence, Gololo insisted that Mustapha should be replaced as SGF and all the ministers should be shown the way out.

He said, “President Buhari is a nice gentleman with much integrity. But unfortunately, he has surrounded himself with a clog of sycophants who only succeed in bringing a bad image to the nation and bringing the President to international disrepute.

“None of the ministers has inaugurated any project since inception. No road or even flyover has been inaugurated. Yet, they keep speaking English every Wednesday and taking huge allocations to their ministries with nothing to show for it.

“As for Boss Mustapha, I have lent my voice to the voices of other Nigerians several times that he should be probed. His PTF on COVID-19 is a pack of corruption. The Senate had invited the team to explain how billions of naira allocated to that Task Force within a short time was expended, but the SGF could not give an account.

“Still, he keeps on pushing for more billions of naira. Now they are signing an executive order on COVID-19; that is a good thing. But they should also quickly probe the COVID-19 funds and let the whole world know we are not corrupt as they said.”

Gololo stressed that the two major challenges facing the country now were corruption and insecurity and that it would take the President those things he suggested above to get Nigeria out of the shackles.

He vowed to always speak the truth and guide those in authority rightly, saying he laboured to make sure the APC formed the government and so he would not fold his hands and allow those who “lost” their polling units during the general elections derail the original ideology of the party and bring the names of the country and the President to international disrepute.