Sagay Blasts IPOB, Says Buhari Have Right To Run His Govt The Way He Wants 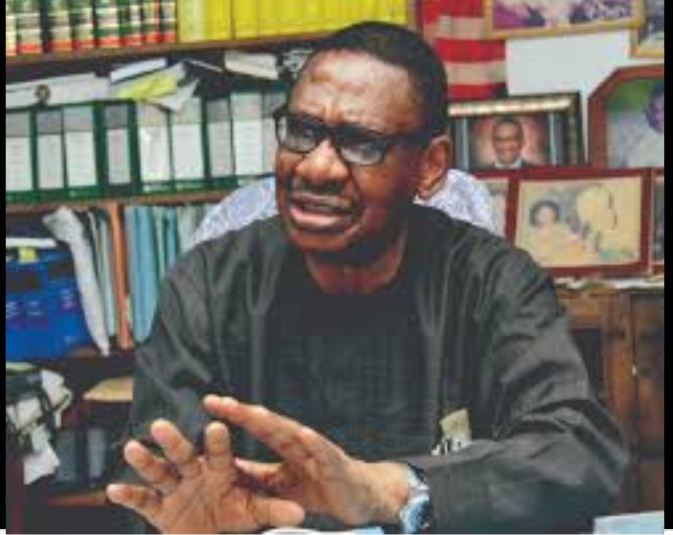 SAHARANEWS – Prof. Itse Sagay (SAN), Chairman of the Presidential Advisory Committee Against Corruption (PACAC), in this interview with TEMIDAYO AKINSUYI, speaks on the arrest of 80 Nigerians by the Federal Bureau of Intelligence (FBI) for cyber fraud and role of the Nigerian government. He also speaks on the attack on Ike Ekweremadu, former Deputy Senate President in Nuremberg, Germany as well as President Muhammadu Buhari’s directive to Ministers to go through his Chief of Staff, Abba Kyari. Excerpts:

How do you feel given the indictment of 80 Nigerians who are arrested by the Federal Bureau of Intelligence (FBI) in the United States for cyber fraud?

It is very worrisome and I am very disturbed because it can affect not only our international image but also the prospect of interaction and travelling of Nigerians internationally, especially the manner in which you are regarded when you are even in the midst of foreigners. So, it is a very disturbing issue.

What do you think the Federal Government can do in this situation?

There is nothing the Federal Government can do. The FBI is already taking action on the matter. The only thing the Nigerian government can do is if there are some of the accused people here in Nigeria, the American government may request extradition of such people.

So, in that case, the Nigerian government can act. If the accused persons are unwilling to travel to the US themselves, then the FG can commence extradition proceedings.

That is the best the Nigerian government can do because the offence was committed in the US and the US is the primary prosecutor of the matter.

Following the attack on former Deputy Senate President, Ike Ekweremadu in Germany, the Indigenous People of Biafra (IPOB) has threatened to humiliate other prominent Nigerians who traveling abroad. Don’t you think this is a dangerous trend?

It is extremely worrying that a Nigerian could be subjected to that barbaric attack outside the country, whether he is a politician or not. I think if we have a case against anyone, we can express it as some of us usually do when we have any grouse against anyone or the Nigerian authorities.

We say our mind and let the public be the judge so that with time, those things can be corrected but to launch violent and humiliating attacks on a politician of that status or any Nigerian in another country is deeply disturbing. And the threat that it is going to continue and they will attack other Nigerians is even more disturbing.

ALSO READ:  We'll continue to give electricity to all households in Nigeria — Buhari tells UN

But I think if they make this attack a regular thing, it probably will end in their being prosecuted in the country where they are perpetrating the attacks and that will be the end result of it and they will elicit more sympathy for whatever struggle they think they are agitating for . It is a mistake for them too but very ominous for Nigerians abroad who are descending to this level by carrying out these attacks no matter what they call themselves.

There have been criticisms over the statement credited to President Buhari directing Ministers who wants to schedule meetings with him to go through the Chief of Staff, Abba Kyari. What is your take on this?

Yes, I have read the arguments on the statement made by the President. If that is the way the President wants to run his government, nobody can question him about it. He has the prerogative. Everybody cannot go directly to him. He needs someone who will be the gatekeeper. The way I see the whole thing is that everything depends on the President. The role of the Secretary to the Government of the Federation (SGF) appears to have been a bit diminished to the advantage of the Chief of Staff because I even read Doyin Okupe saying Secretary to the Government is just secretary to the cabinet.

I think his role is more than that and not just a secretary to the cabinet. But like I said, it very much depends on the President. If he has so much confidence in the Chief of Staff and wants every person who wants to see him and every communication directed at him to pass through that Chief of Staff, then he is entitled to it but for us outside, whatever happens as a result of that, we will say the President is responsible for it. Nobody is going to blame the Chief of Staff because the bucks stop on the table of the President.

In fact, the Chief of Staff is not known in our constitution, it is the President who has the authority. So, it is a matter of choosing somebody who you have confidence in, who will do a good job on your behalf.

BREAKING: “They Will Pay With Their Bloods If IPOB Dare Attack Buhari In Japan” – Junaid Mohammed