BREAKING:Visa applicants denied due to Trump travel ban can…

Nnamdi Kanu Describes Igbos, Biafrans As The Most… 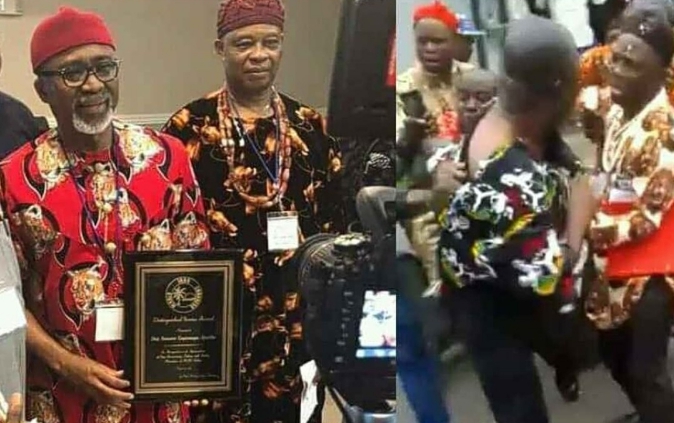 SAHARANEWS – The easiest question that comes to the average onlooker of two Igbo Senators, Dr Ike Ekwerwmadu and Enyinnanya Abaribe, invited by their counterparts abroad, is why would they be treated differently?

No matter how the question is posed, the point that both iconic senators were invited by groups abroad but received different treatment raises an eyebrow.

In life, we would always allow posterity to judge us overall we do on earth after we may have died but in some cases, we choose to give signs on how posterity will determine its futuristic judgement.

In the case of the former deputy Senate President, Ike Ekweremadu, who was pelted with eggs, yam, amidst his position as public office holde shows that he may have done more wrongs than good through his representation.

Though, taking a forensic measure, we could see one or more good things visibly which Ekwerewmadu has done yet why was he beaten?

On his invitation to Germany, he said: “A group of young people with IPOB emblem and shirts were also standing there. One of them then accosted me and said that we didn’t do much when the Federal Government declared Operation Python Dance in the South-East.

“They asked me to address them on the issue right there but I told them that it was part of the issues I would address when I speak during the programme, but they said No! They became agitated and started attacking me immediately.”

On the hand, Dr Enyinnanya Abaribe appears to be in the heart of Igbos in Diaspora and home regards to his recent invitation abroad where he was expected to receive the treatment of rejected leader instead, he was celebrated.

Abaribe, who is also a serving Senator, was also invited by World Igbo Congress (WIC) at the weekend in Houston, Texas to test the imagination of majority whom he has impressed in one way or the other, including the IPOB leader who he bailed with a whopping amount of Hundred million Naira.

The Minority leader of the 9th Assembly, Senator Enyinnaya Abaribe, was conferred with the prestigious Distinguished Service Award 2019, for his courage, consistency and the defence of rule of law and People’s rights in a democracy.

What a different way to different same people? To this regard, the humiliated and celebrated must have to do something from this point. Either the later rekindle the former light of goodness or watch him receive the stone in the next invitation.

The light of good should go on and on while the darkness of bad opens the door for light. Igbos deserve more good now or never.