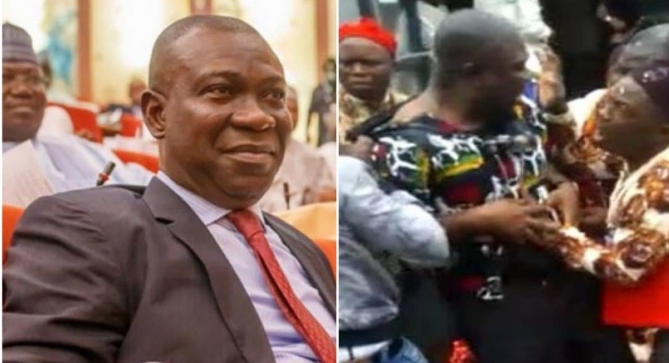 SAHARANEWS – Nigerians in the Diaspora have been urged to see the recent attack on Senator Ike Ekweremadu in Nuremberg, Germany, by his fellow Igbo indigenes in that country in the positive light of a new dimension to the nation’s battle against corruption and bad governance.

A Fellow of the Nigerian Guild of Editors and Public Affairs Analyst, Dr. Bisi Olawunmi, who gave the charge through a statement made available on Sunday to Independent, noted that though instigated by a secessionist group, the attack must be understood by Diaspora Nigerians that secessionist tendencies are often triggered by bad governance and mind-boggling corruption, which have held the people down in servitude and forced many in the Diaspora to flee home and remain literally stranded in foreign lands.

Dr. Olawunmi urged Nigerians abroad and particularly the various ethnic groups, who know their people better, to take on their corrupt fellow indigenes holding public offices, including top civil servants, some of who are even more corrupt than politicians, when they visit to flaunt their ill-gotten wealth.

“The Ekweremadu treatment should signal an awakening in the Diaspora Nigerians of their power to positively contribute to turning around the fortunes of their homeland, wrecked by brazen looters, rather their perennial lamentations of being forced to remain abroad because of the worsening economic and security situations in Nigeria,” he said.

The former Washington Correspondent of the News Agency of Nigeria (NAN) said that while the anti-corruption agencies have exposed grand corruption of some among the thieving elite, but sometime hamstrung by a compromised judicial system that is looter-friendly, Diaspora Nigerians can complement these efforts by targeting the luxury properties of the looters in the countries of their residence, through pickets and publicity of such proceeds of corruption.