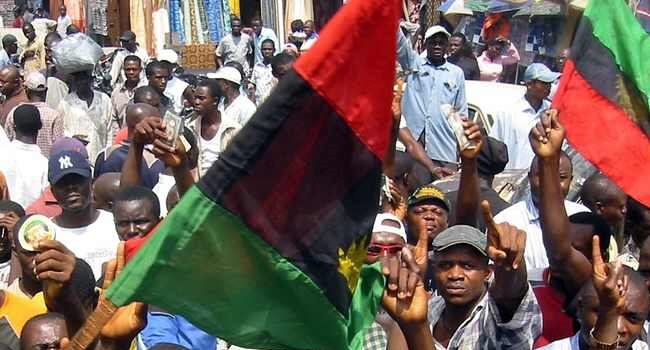 Report reaching SaharaNews has it that the members of the Indigenous people Of Biafra ( IPOB) on Friday staged a peaceful protest in a renew call to boycott 2019 general elections.

An Eyewitnes who spoke with SaharaNews correspondent said the fierce looking IPOB members were clad in red and black and armed with their flags, He said they started their protest march from the Onitsha head bridge to Abraka quarters in Asaba to Nnebisi road and towards the Inter Bau roundabout in Asaba where they allegedly removed Atiku/ Obi posters from walls, and electricity polls, including signboards bearing individuals’ companiy names

It was gathered that though the protesters displayed high level of maturity, they were closely monitored by heavily armed security operatives

But the Police Public Relations Officer in the state, DSP Andrew Aniamaka who confirmed that the IPOB members were on a peaceful protest to newsmen in Asaba, dispelled the fear of the unknown, adding,” The police will do everything possible to bring to book anyone who may wish to cause trouble during or after the elections.”

On the removal of the posters of the PDP candidates,(Atiku &Obi), DSP Andrew Aniamaka said no arrest has been made, adding that Investigation was ongoing with a view to arresting the evil perpetrators.

ALSO READ:  Despite His Biweekly Routine Medical Trips To UK, The General Orders Nigerians To Stop Traveling Abroad For Treatments

Leader of the IPOB members on protest, Benjamin Ezegbune who spoke to newsmen Said “ Our protest was not to harm anyone, but to sensitize our people. I mean the IPOB members who to boycott elections in the state and others are mature and responsible people but we will not participate in the elections, We have agreed to boycott the elections because we have no faith in Nigeria’s democracy, IPOB Members are not fools.”

ALSO READ:  Live in Enugu: This is a battle between millions of Nigerian youths and a few cabal.(See Photos)