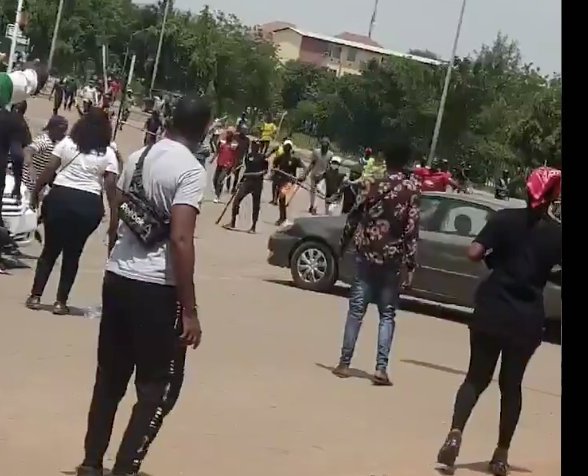 The Nigerian Senate has waded into the attacks on the #ENDSARS protesters by sponsored armed thugs in Abuja and Lagos with an assurance that the matter would be discussed at the plenary session today.

The Senate also promised to take a decision regarding the vandalised vehicles of the protesters.

The attack, which took place at Berger Roundabouts in Abuja, left many #ENDSARS protesters injured and vehicles vandalised.

Addressing the protesters at the gate of the National Assembly, the Senate Majority leader, Senator Yahaya Abdullahi, and Minority Leader, Senator Eyinnaya Abaribe, said the Senate would take action.

Abaribe asked the leaders of the protesters to bring the photographs of the vandalised vehicles and their demands to the National Assembly.

The Senator also invited the representatives of the protesters to their plenary session to enable them to witness and observe the proceedings on the matter.

He said, “If you can do us a small favour by letting us have the photographs of the cars, we will present everything, and we are going to take a decision on whatever that you have written out, and you will watch it, and you will see it. We don’t hide anything here.”

One of the leaders of the group, Raphael Adebayo, expressed disappointment over the attacks by the thugs.

“They damaged our cars. They injured some of us. If not because we are a courageous and resilient generation, we would have run away. They stole our wallets, our phones,” he said.