Kanu’s family clears air on why they asked for… 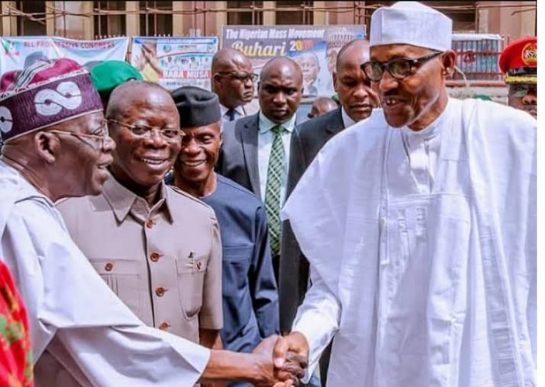 SAHARANEWS – The ruling All Progressives Congress (APC) has finally revealed its true colour and hate for Igbo nation.

This is coming few weeks after the 2019 general election and few months away from the new political dispensation expected to take off in June.

The party’s position on Ndigbo, SaharaNews reports, was revealed by its Deputy Spokesman, Yekini Nabena in a media chat with journalists on Thursday.

SaharaNews correspondent who covered the event reported Nabena as saying that Ndigbo have never gotten what he described as “juicy positions” in the Nigerian politics because according to him, the Igbo people always played themselves out.

The party spokesman said the people of South-East are the most uneducated neophytes when it comes to “playing politics” in Nigeria.

According to him, the people of South-East are fond of putting all their eggs in one basket.

He cited an ‘example’ where he said the South-East region rejected President Muhammadu Buhari and voted Atiku Abubakar of the PDP. Whereas, Buhari polled over 25 percent votes in 3 out of the 5 South-East states in 2019, Nebana claimed the region cast over 99.9 percent votes for Atiku.

Checks by SaharaNews also showed that in Abia state, Buhari defeated Atiku in all the 5 Local Government Areas of Abia North Senatorial district. APC also won the Senate seat and 2 out of the 3 House of Representatives seats in the area due to the influence and hard work of ex-Governor Orji Uzor Kalu for the ruling party.

“The people of South-East should be blamed for their predicaments because they don’t know how to play politics. They play politics like a one-way thing. They all voted for Atiku in the presidential election. So, now that Atiku lost, what’s the way forward for the region?. They shouldn’t wail if we fail to recognize them because over 99.9 percent of them followed Atiku.

“They should learn how politics is played especially at the national level. They should play 50-50. If this one didn’t work, the other can work,” Nabena added.

Nabena’s statement has since been met with criticisms and diverse reactions from Nigerians online.

While some Nigerians on social media identified Buhari as ‘Tribalist’, others accused the APC of practicing sectional politics full of hatred and nepotism.

Here are some comments gathered by SaharaNews on social media:

“It is unpatriotic to say that Igbos shot themselves on the leg by voting Atiku. It is undemocratic not to have choice. Even at home identical twins may not like the same thing.
Igbos are Nigerians irrespective of who they voted for. Oshiomole himself started with Labour party before abandoning it.” – Oyejinde

“I don’t c what positions have to do with with d voting pattern of Igbos in d last elections, It’s not right to generalize. In Abia for instance, Orji kalu delivered 4 APC in his own little way.” – Michael

“APC should know that the Igbo man will always thrive no matter the condition. Sideline us, incapacitate us, come for our heads, we’ll still find a way to survive, as far as the sun rises; our sons and daughters will be informed of the acts of this government, for reference purposes.” – Fizzy

“This is coming from a ruling party that suppose to unite Nigerians immediately elections are over. God, what is the sin of Nigerians that you have cursed us with this kind of leaders? So if a zone did not vote for you, it has stopped being part of the country?” – Collins

“Another beer parlour slowpoke speaking as a drunkered. Do we also blame Abia where Buhari won convincingly? And this bloody idiot is a party official. What a shame. Nigeria can never progress with this mind set.” – Gift

“Yoruba man with politics of one basket, what does that mean in democracy?” – Ojiofor

“Since Lawan said he will not mind spearheading a constitutional amendment for life presidency, they should also reflect it in their new constitution that any zone that does not give at least 50% votes to the ruling party should forget ministerial appointments since some idiots don’t understand the meaning of inclusive governance but remain stuck on their skewed interpretation of ‘winner takes all’” – Favour

“APC does not understand the meaning of unity. They play divisive politics and look for excuses. They may regret their actions soon. Are Igbos not Nigerians? Did some Igbo states not vote for APC in Presidential election? What is wrong with APC and sectional/vindictive behavior. I have never seen PDP accuse any tribe or section in this country since 1999.” – Jasmine

“US have told them to use this tenure to unite the country, they are inciting nepotism again, if u will marginalize them allow them to leave. Simple. APC govt is hopeless. One day Buhari and all the idiots supporting this evil will drink sniper” – Ogunjumo

“Smh! Same APC that said Ibo didn’t have reps in NASS to make leaders. Now they’ve, same APC is giving another reason why they shouldn’t be considered for a position bla bla bla. Lyk seriously?” – James