Not just Peter Obi, Can Ohanaeze Ndigbo and few Eastern…

Those contesting for election in Anambra killed Dr. Chike… 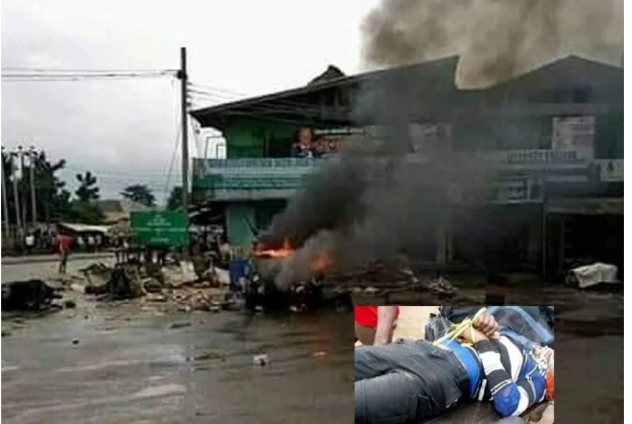 According to eyewitnesses’ account, the deceased had refused to give the soldiers at the checkpoint the N100 they had demanded. One of the soldiers was said to have pursued Chimaobi on another motorcycle.

The soldier was said to have trailed him to his village in Umuokereke Ngwa community in the same Obingwa LGA and shot him dead in front of his father’s compound.

“We were still wondering what might have happened when the soldier shot him and he fell from his motorcycle. “The soldier fled the scene immediately.

“Now, Chimaobi’s wife is heavily pregnant and may soon put to bed. He left three children, who is going to take care of them?”

Meanwhile, youths in the community have taken his corpse to Ohanze community where the soldiers’ checkpoint was located.

They also set the military checkpoint on fire, even as the soldiers watched without fighting back.

When our Correspondent visited  contingent of mobile policemen was seen at a strategic area of the Opobo Junction as people hurried home to avoid being cut in the web.

The police were later joined by a convoy of military vans who arrested some of the protesting youths as more anger flow like ocean.

Efforts to get the reaction of the Assistant Director, Army Public Relations, 14 Brigade, Ohafia, Major Kadiri Aliu, was not successful as he refused to pick his calls; nor did he respond to text messages sent to his mobile number