Leaked Video Of The True Situation In Sambisa Forest Between…

SOUTH-EAST LEADERS: “If You’ve Done Nothing Wrong, You Don’t Need To Be Afraid Of Traveling Abroad” – IPOB’s Attorney, Says Nnamdi Kanu Doesn’t Have Personal Issues With Any Leader 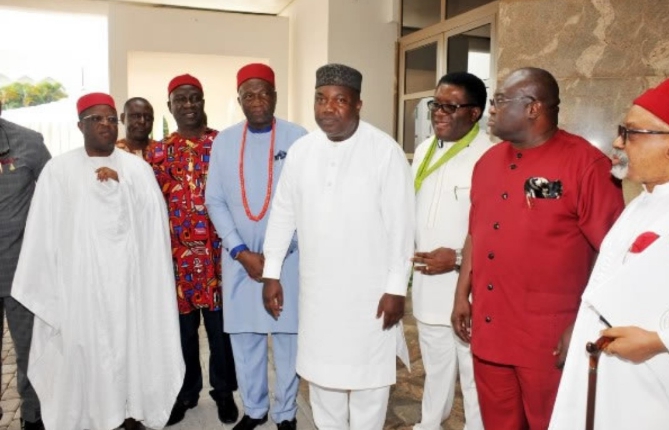 SAHARANEWS – I write as the Special Counsel to Mazi Nnamdi Kanu and the Indigenous People of Biafra (IPOB), and I can tell you authoritatively that my Clients, particularly Nnamdi Kanu never made any threats of levying violence or to “physically attack” SE Governors or elected officials when sighted overseas.

What Kanu had said, and it’s verifiable, is that Nigerian elected officials, especially those from SE (including Governors), who derelicted and still derelict in their duties to the people and prefer to junket and gallivant abroad should be ‘prepared to answer tough questions from the Nigerian/SE diaspora’. And such engagements will be up close and personal; or as American say: in your face. It’s left to conjecture why the Umahi-led SE Governors, more than all others, are the ones getting too personal with this.

In plain terms, the so-called threat is not of violence or battery but of gutsy demonstrations or protests, of tough questions or heckling, of getting really close to the target. Therefore, Kanu never threatened or sanctioned any threat of actual physical violence, assault or battery, or anything that is illegal or criminal. And he had also stated that you don’t have to be afraid if you have done nothing wrong.

So, what I believe that is fueling this misconstruction of the true import of what Kanu had said is this: Nigerians at home hardly carry their protests to the face of their elected officials. They do complain but they do ever so quietly and then become cowed once in the immediate vicinity or presence of these officials. Still, this is a dramatic departure from the era of Jonathan when Nigerians, including Buhari, were permitted much space to protest as they desired.

The Nigerian diaspora is different. They demonstrate to your face, they heckle you, they come very close and express their discontent in uncomfortable words and actions that these officials are not used to back home but which, however, comport with how citizens of those foreign nations protest or confront their leaders in the public. That IPOB now appears to be leading it is a direct consequence of its international reach, coupled with the repressive environment for protests in Nigeria.

I think Nigerians, particularly Igbos need to see the Ekweremadu incident in Germany from the prism of the pertinent German law, which, as we now know, is unarguably permissive of it. So, even as it might implicate a cultural conflict, we just have to accept that – in many countries – citizens are allowed more space to hold their leaders to account.

A few days ago, the Channels TV aired a live telephonic interview with the Nuremberg police chief, where the officer stated very clearly and repeatedly that the incident was not criminal and that no charges would be brought. He suggested that it was a case of mere political heckling, which is permissible under German law. So, I ask: If the place of the incident did not consider it a crime, why should any other person consider it as one?

As regards reconciliation with Igbo elected political leaders, the IPOB had, in the recent past, made public their basic conditions for reconciliation.

They include particularly the following:

(a)Immediate and unconditional de-proscription of IPOB and delisting it as a terrorist organization.

(c)A public apology for the extrajudicial killings of IPOB members and desecration of the palace of an Igbo traditional ruler at Afaraukwu, Abia State.

(d)A genuine dialogue with IPOB on its demands for a referendum on the restoration of Biafra.

(e)Discontinuance of the ongoing prosecution of IPOB members and forbearance of any future arrests and prosecutions.

Is this asking for too much?

BREAKING: (VIDEO) Buhari, Still At Large IPOB Insists, Releases Proof That He Is Not In Japan