BREAKING: (VIDEO) Great Jubilation For Biafrans All Over The… 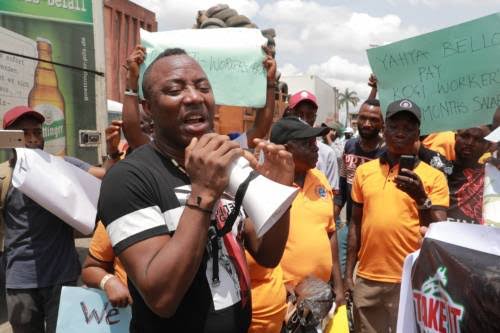 The former Presidential Candidate of African Action Congress, Omoyele Sowore, and members of the party have given the Independent National Electoral Commission a two-week ultimatum to return the party to the owners or have its offices shut down nationwide.

Sowore, who led members of the party to the INEC headquarters in Abuja on Tuesday to submit a letter, gave the Chairman of the electoral body, Mahmood Yakubu, till March 15, 2021, to stop imposing expelled former National Secretary, Leonard Ezenwa, on the party as its National Chairman.

He said the party would mobilise and direct all its members at the expiration of the ultimatum to occupy and shut down all the offices of the commission across the country.

He faulted the partisan role played by the commission in giving illegal recognition to those who had been expelled by the party’s highest decision making body, National Executive Committee, to cause confusion in the party.

ALSO READ:  "I’ve Kept My Promise, We Have Made Remarkable Progress In Ending Boko Haram" – Buhari

Sowore said the commission deliberately rejected their letter because of its interest in the leadership of the party who would be loyal to the INEC chairman.

The human rights activist said, “They rejected our letter last week because INEC has become a partisan body in Nigeria. They engaged in rigging of elections, they engaged in rejecting and accepting which chairman is loyal to the chairman of INEC or not.

“Today we have come; what we could not accomplish last week, we have just accomplished now. We have submitted the letter but the reason why we came here is not because of AAC alone.

“We are here because INEC has become a ridiculous umpire in the conduct of elections. INEC commissioner’s, including the chairman have become tools in the hands of the ruling party, All Progressives Congress.

“We are now saying that starting from March 15, 2021, if INEC does not restore the ownership of AAC to its original owners, we will shut down INEC offices across the country.

“We will occupy INEC until the chairman and all commissioners are removed. They don’t have the credibility to conduct free and fair elections.”

He warned the electoral body to thread with caution and not to truncate the fragile democracy of the country.

He added that AAC supporters and members would do everything within their power to ensure that democracy works in Nigeria, noting that they were not afraid of being arrested and jailed.

“If we have to go prison to ensure that democracy works in Nigeria, we will go to prison. If you have to shoot us because of democracy, we will take it. We will not continue to condone irresponsible officials who are supposed to be neutral but are always partisan in matters that affect democracy.

“You are our employees; we are taxpayers and citizens of Nigeria. If you don’t do your job, we will teach you how to do it,” Sowore stated.

“The reason the government is doing this is that the ruling party is obviously aware that AAC is the only party that can bring an end to the shenanigans in government and 60-year-old ineptitude, corruption, maladministration that have been imposed on the country.

“And they also know that the leadership of Omoyele Sowore has the ability to lead this struggle of 60 years of slavery.”

The commission has continued to sabotage the efforts of legitimate leaders of the party despite the fact that all party organs, including NEC in their meeting in July 2019 and December 10, 2020 resolved unequivocally that Sowore remained the party chairman.