BREAKING: A 22-Year-Old Student, Raped And Smashed To Death…

JUST IN: I Was Offered Money To Compromise 2019 Elections —… 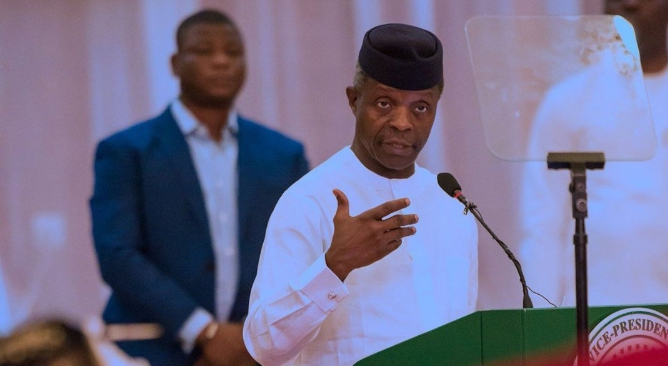 SAHARANEWS – Vice President, Yemi Osinbajo, has said that Nigeria can become a stronger and more prosperous country if states have more powers.

Osinbajo stated this while speaking at the 59th Independence Anniversary Lecture at the Island Club, Lagos, on Friday, according to Channels TV.

He said Nigeria’s population and diverse ethnic groups have necessitated that states in the country be strengthened to enable them contribute more to national productivity and development.

According to him, this can be achieved with “stronger, more autonomous states that are able to generate and control more of their resources”.

He said, “The most important transformative change we can make in Nigeria is to lift the majority of our people out of deprivation by speedily creating wealth and opportunity leading to the eradication of poverty.

“In other words, the federation can only be as rich as its richest state and as strong as its strongest state.

“Our national indices merely aggregate the realities of our weaknesses and strengths as present in all our constituent units.

“Building stronger states means ensuring the devolution of more power to the states, enabling them to control more of their resources and make more of their own administrative decisions such as the creation of local governments, the establishment of state and community police forces as well as state correctional facilities; creation of special courts and tribunals of equivalent jurisdiction to high courts.

“The point I am making is that states must have more powers and more rights.”

The Proposed Federal Toll Gates, A Deliberate Move By FG To Make South East A Hostile Environment For Business