PDP CAMPAIGN: A political rally or a feeding program 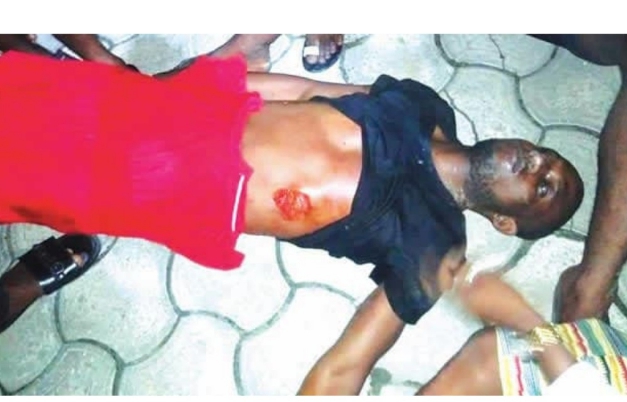 SAHARANEWS – police officer attached to the Elimgbu police station in Obio/Akpor Local Government Area of Rivers State, has been accused of stabbing a 20-year-old man, Nyebuchi Ihunwo, to death.
According to reports, the police officers had stormed Atali community in the area to make some arrest.

Ihunwo was said to be buying roasted corn by the roadside when he was accosted by the police officers and was told he was under arrest. He inquired from the police what his offence was but was asked to simply follow them to their station where he would be informed of his crime. He reportedly refused to follow them and the police allegedly tried to forcefully arrest him. It was in this process that one of the officers, Inspector Chinedu, allegedly brought out a knife and stabbed the deceased to death.

Reacting to the incident, the state commissioner of police, Usman Bele, in a statement released, denied the allegation. According to the police chief, youths from Atali community numbering about 100, broke and fell the perimeter fence at the back of Elimgbu Police Station where an apartment belonging to one Sergeant Israel Sunday was set ablaze.

“The matter that gave rise to this incident is that men of the IGP Monitoring Unit investigating a case of kidnapping, with the aid of technical intelligence, tracked the identified suspects to Atali Community.

On arrival, the team identified their targets and immediately arrested them. While they were taking them to Elimgbu Police Station, the suspects raised the alarm and started chanting cult slogans, which attracted members of their gang and youths of the community, who immediately swooped on the police, attacked, overpowered and rescued the two suspects who were in handcuffs.

“In the scuffle that ensued, a police sergeant was seriously assaulted and injuries inflicted on him which led to the rescue of the arrested suspects. Seeing that they have been overpowered, the police beat a fast retreat and went for re-enforcement.

“Consequently, when the rampaging cultists/youths sighted the police re-enforcement, they mobilised again in their numbers and one of them with a knife attacked ASP Chukwuma Onuora and as he was to stab him, he defended himself and while they were struggling with the knife. The boy had a cut on his stomach. The same youths took him to the hospital where he later died,” Belel said

JUST IN: Linking Us To Death Of Prophet Nwoko, Effort In Futility — IPOB

JUST IN: “Swear With The Qur’an That You Didn’t Rig The Election” – Galadima Blasts Buhari