UNBELIEVABLE: The Unexpected Happened When A Soldier Fired…

BREAKING: Do You Know That Atiku Is From Cameroon?” – Nnamdi… 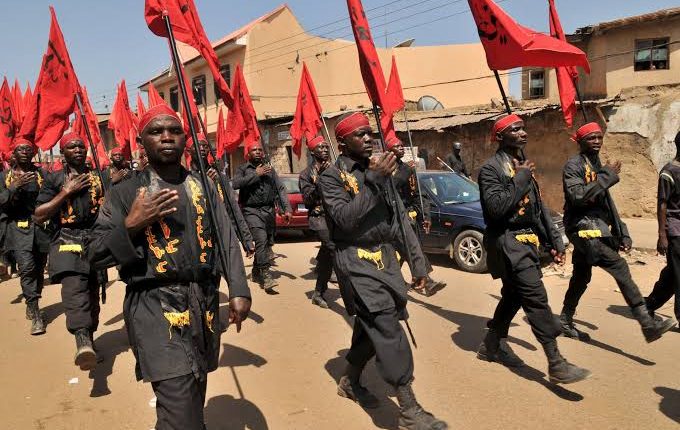 The Islamic Movement of Nigeria (IMN) popularly known as ‘Shiites’ on Monday in Abuja embarked on its annual Arbaeen Symbolic Trek amidst tension and traffic gridlock.

Arbaeen is a Shiite annual religious practice usually conducted on 20th Safar of Islamic calendar to mark the 40th day of the murder of Imam Hussein, the grandson of Prophet Muhammed who was killed on 10th Muharram.

The peaceful procession, which kicked off from Masaka in Nasarawa State ended at the Mararaba area leading to a gridlock in the area.

Members of the sect were seen with placards including portraits of the sons of their leader, Ibraheem El-Zakzaky who were killed during the ‘Zaria Massacre.’

According to a leader of the Movement, Sheikh Sidi Sokoto, who addressed journalists, said the purpose of the trek was to experience the trial and tribulation faced by the household of the Holy Prophet who was chained and dragged in the scorching desert, barefoot from Karbala in Iraq to Damascus in Syria after the killing of Imam Husain 61 years after Hijra.

ALSO READ:  BURSTED: Flash Back To June 12, The Video That Put MKO Abiola Behind The Red Lines - See Video

“The fortieth day (Arbaeen) commemoration after the martyrdom of Imam Husain, the grandson of Prophet Muhammad (SAWA) is commemorated annually by the Islamic movement, following a symbolic trek by millions of people from across the country.

“Though we started with few people and confined ourselves to a particular place and recited some supplication, we thank Allah now; we trek in millions, an indication that people are gradually beginning to realise the lofty position of Imam Husain (AS) in Islam.

“Today, the general public have witnessed how the Arbaeen trek like those before ended without any attempt to curb the right of safe passage to other road users. No panic was created by our Arbaeen trek. Love for Imam Husain (AS) is not the exclusive right of Muslims only. But because of the gruesome attack on the Imam at Karbala, the fortieth day after is commemorated by and for all those who love justice and fight against oppression in all ages, including ourselves.

“That is why we always welcome our brothers and sisters whom of their own free will trekked with us today. This is not the first time they have identified themselves with Imam Husain; they have done it before and we thankfully welcome them. This is the handwork of Allah, and not the trick or influence of anybody as no one forced us to trek, it is out of free will and love for the family of the Prophet(s),” he added.

There was no incident of violence during the rally as passers-by and residents were seen going about their normal businesses.

Recall that the movement had on so many occasions lost its members across the country following the attacks by the security agents.