HAPPENING NOW: Another Prophesy of Nnamdi Kanu just came to… 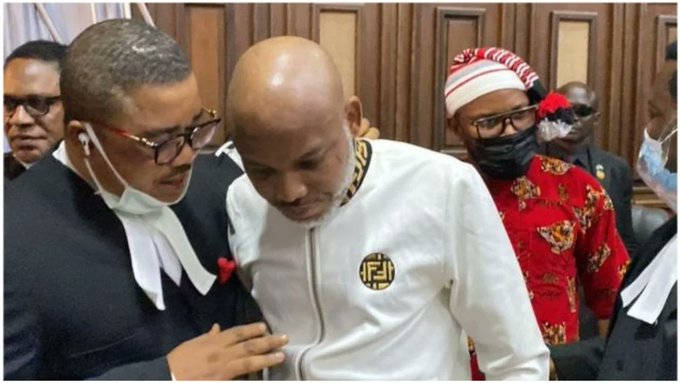 As it appears that many Igbo elites are awakening, the recent calls for the release of the leader of the Indigenous People of Biafra (IPOB), Mazi Nnamdi Kanu, are gradually taking on a new dimension.

“Whenever one wakes from sleep, is his or her morning,” according to an Igbo proverb. implying that “later is better than never”

Ohaneze, the most powerful sociocultural group of Igbo people, has once more called for Mazi Nnamdi Kanu’s freedom in a wake-up call. This call was made by Boss Damian Okeke-Ogene, the VP of Ohaneze Ndigbo Around the world, through a press explanation delivered in Awka, where he said the arrival of the IPOB pioneer would capture the distress in the zone. As he expressed his support for the call made by the governor of Anambra state, Professor Charles Chukwuma Soludo, Chief Damian also made it clear that the Nigerian government led by President Muhammadu Buhari has no moral or legal basis to continue detaining Mazi Nnamdi Kanu.

“The call should be supported and re-echoed by other stakeholders in Igboland as reflected in the stand of late Mbazulike Amaechi and late Ohanaeze President, Professor George Obiozor,” the statement states. We ask the governors of the South East to back up Soludo’s call.

The statement came to a conclusion that “since courts of competent jurisdiction have ordered his unconditional release, the Federal government has no legal or moral basis to continue holding the IPOB leader in captivity.”

We will keep our fingers crossed to see if they have truly started this course of action or if they are still engaging in the usual awkward politics.

Despite the fact that Governor Charles Chukwuma Soludo’s public call for Mazi Nnamdi Kanu’s release was lauded by some, many others (including IPOB) criticized Soludo’s pleading with the government and vouching for the IPOB leader, who has already been released from prison and cleared by courts of competent jurisdiction.

According to the vice-president of the group, the Ohaneze’s call was also in favor of the Soludo’s move. We are keeping an eye on the situation as a result; whether the stakeholders in the region will give Ohaneze their undivided support to push for the IPOB leader’s unconditional release because there is no moral or legal justification for his continued detention, or will they opt to plead with the government to bail the IPOB leader against the decisions of the courts.

Gabriel Onyemachi, who works as a reporter for Family Writers Press International,