“We Have Nigeria Govt Where We Want Them, They Will…

I Would Have Arrested Peter Obi – El-Rufai 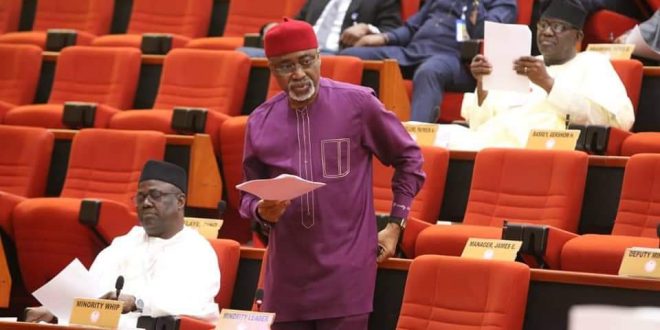 This week I am continuing with my no-holds-barred interviews with some outspoken Nigerian leaders.

As soon as we settled down for the interview in his office at the National Assembly, my first question to Senator Enyinnaya Abaribe, the Senate Minority Leader, was to tell me about the three attempts to impeach him when he was the Deputy Governor of Abia State and the circumstances that surrounded his resignation from that office in 2003.

He explained that he and Governor Orji Uzor Kalu, were sworn in on May 29 1999, and by August of the same year, things had begun to go awry between them. There were three attempts to impeach him: the first was in August 1999 but after he responded to the charges by the State House of Assembly within the statutory 14 days he was exonerated. The second attempt was in mid- 2000. The House wrote to him again to respond to some charges but without giving him the statutory 14 days to reply, went ahead to write the Chief Judge of the State to constitute an impeachment panel against him. He refused to appear before the panel but instead challenged the proceedings in court on two grounds – that due process was not followed and that he was denied fair hearing. The court ruled that it did not have the jurisdiction to hear the case. He appealed against the judgment but the Appeal Court upheld the judgment of the lower court by arguing that the “the judiciary should not descend into the murky waters of politics”.

Though he narrowly escaped impeachment when the Abia State House voted on the matter, he argued that one of the fallouts from the Appeal Court judgment was a rash of illegal impeachment of Governors – Peter Obi in Anambra State, Joseph Dariye in Plateau and Rasheed Ladoja in Oyo State. He said it was only when Ladoja was impeached by the Oyo State House of Assembly by less than the number of lawmakers required by the Constitution that he went to the Supreme Court, which reversed the impeachment on the ground that due process was not followed.

“The Supreme Court essentially held that the court is not supposed to interfere in the decision of the House of Assembly, but only in so far as they follow due process”, he said. On the third attempt to impeach him in 2003 he decided to resign because by then he had “been suspended and frozen from the party”. He sent his resignation letter by courier on March 7 2003 and decamped to another party to challenged Orji Kalu in the 2003 Abia State Governorship election – but lost. “One of the unfortunate things that happened however was that the young man who innocently received my DHL mail and signed for it was sacked.”

On the real cause of the quarrel between him and Governor Uzor Kalu, he demurred, promising that the details would be in his forthcoming book – though he mentioned that one of the reasons was that “the new set of governors had military mind set and Governor Orji Kalu often boasted of being one of the ‘Babangida boys.’” He said his relations with Orji Kalu these days are cordial.

I asked him to tell me more about his involvement in securing bail for Ralph Uwazuruike, leader the banned secessionist Movement for the Actualization of the Sovereign State of Biafra (MASSOB) in 2007, and of Nnamdi Kanu, leader of IPOB, whom he stood surety for.

He explained that when Ralph Uwazurike was arrested and detained, the Southeast caucus of the Sixth Senate led by the late Uche Chukwumerije decided to go and see late President Yar’adua – whom he called a “great man”. With Yar’adua they made a fairly simple case for Uwazuruike and MASSOB: those talking about Biafra were essentially crying out because of certain policies of the federal government which gave the impression that the Igbo are being treated unfairly in this country. They advised that the best way to deal with such agitators was not to round and lock them up and then throw away the key but rather to engage them in dialogue with a view to discussing their grouses and finding out how they thought such could be remedied. They were eventually able to secure bail for Uwazuruike and they (the South-east senators) stood sureties for him without any monetary condition being attached to his release.

“For the Nnamdi Kanu saga – there’s a whole lot you can say about it. But when you look at the basics and the fundamentals, it remains the same.” Just like they did with Yar’adua, the South-east senate caucus, now under the leadership of Abaribe, also met Buhari over the detention of Nnamdi Kanu. Nnamdi Kanu was ultimately granted bail but with a “humongous figure of N100m surety for each detained person and there were three of them.” The Senators rallied round ad perfected the bail conditions.

He talked about his experiences as a surety for Nnamdi Kanu, especially after the IPOB leader apparently jumped bail. Senator Abaribe was at a point arrested and detained by the DSS and his home searched.

I asked about the Igbo mantra of marginalization, and whether the internal contradictions in the Igbo society – such as not having a leader they can rally around- is not facilitating such marginalization.

“Let me start from the point at which you also started – that is our different politics – a point that the late Gani Fawehinmi described as the ‘Kabiyesi Syndrome’. He explained that the ‘Kabiyesi syndrome is a situation where you defer to any authority figure to such an extent that you can’t even question anything he does.

“Actually, the Igbo system extols collective decision making. The Igbo egalitarianism is’actually more suited to a democratic system than the other systems – but for the aberration in our democracy. So what is going on today is that whoever emerges as an authority figure in other systems is seen as a Kabiyesi whose word is law and who can do no wrong.

“The Igbo man doesn’t kneel down for anybody except his chi but the man who comes from elsewhere because of his tradition, he can kneel down before authority figures. If you want to know more about the Igbo worldview, I will recommend two books by Chinua Achebe – Things Fall Apart and No Longer At Ease.” He explained that because of the Igbo’s trajectory of egalitarianism, “what you have in Igboland is a collection of leaders – not one single leader”.

He contended that the difference between the north and the east is not the fact of the man in the north being more politically conscious – “ it is the fact of religion. Islam as a religion encompasses your life, your politics, your government and everything. Christianity as a religion does not encompass all that. The man in the north can then be told that person A protects his religion and thus protects his life. But the man in the south who is a Christian but may be Roman Catholic automatically loses interest if the leader in question is Anglican for instance.”

ALSO READ:  "Tinubu Is Leader But Not The Leader Of Yoruba Race"—Afenifere Speaks On 2023 Presidency

On the Supreme Court judgment which sacked Emeka Ihedioha as Governor of Imo State and declared Hope Uzodinma who came fourth in the election, as the duly elected Governor, he expressed concerns that the Supreme Court’s decision might have gone against its own precedents, which has to do with the Evidence Act. “And in the Evidence Act, and in every decided case that we have had till date, with regard to election cases, it always says that every document you bring to court, you must tie it to whatever you want to prove. So for instance, if you bring a result sheet to court, to tie it to proof, you have to bring the maker of that result.”

He argued that under the Evidence Act, the policeman that brought results from the 388 polling units was more of a third party, and his evidence was more in the realm of hearsay. “The danger today is this, if I go into an election and INEC shows up and conducts the election, I can go behind and print my own set of electoral materials, write my own results and when we get to the Supreme court, my lawyer will now say, ‘my Lords at the point at which this same matter came to you, in Hope Uzodinma vs Ihedioha you ruled to accept the results’.”.

I asked if he has plans to retire – or moving to higher office- having been in frontline politics since 1999.

He argued that politicians do not really retire, though they can ‘change gear’. “In institutions, such as the parliament, the longer you stay the better you become. But then, as they say, nobody knows tomorrow. Everything is in the hands of fate and the hands of God.”

A full version of this interview is available on The News Chronicle (www.thenews-chronicle.com)

BREAKING: Nigerians Call For Buhari’s Resignation, Sack Of All The Security chiefs