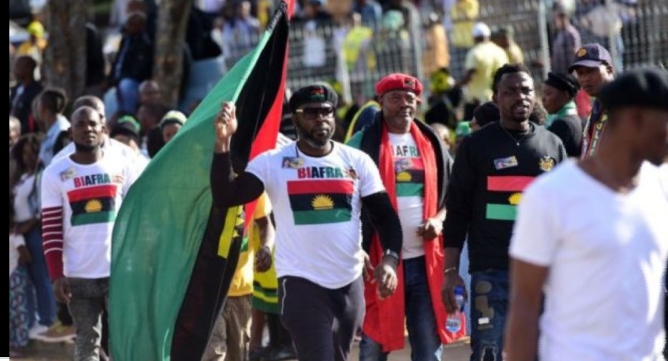 SAHARANEWS – The Indigenous People of Biafra (IPOB) has called on political office holders of Igbo extraction to repent in order to avert the kind of attacks which its members meted out to Senator Ike Ekweremadu, last week in Nuremberg, Germany.

Mr Chika Edoziem, the organisation’s Head of Directorate of State, stated this in a press statement he made available to SaharaNews in Awka, Anambra State.

It said that political leaders from the South-East can still make amends by turning a new leaf, but stated that if they refused, members of the organization will continually attack them overseas.

IPOB added that it was considering adding the entire political leaders in Nigeria into its attack list, saying that they have continually impoverished Nigerians while investing in posh houses abroad and also educating their children in the best institutions of the world.

ALSO READ:  UNBELIEVABL: 5 Christians To Die By Hanging In Yola For Self Defense That Resulted To The Death A Killer Herdsman

“Morally upright people from around the world have commended the Indigenous People of Biafra for once again showing Nigerians the path that will lead them to liberation, that is, if they wish to be liberated.

“As for we Biafran people, our objective is clearly set before us and our destination is a liberated and fully sovereign Biafran nation.

“Taa kabu gboo (opportunity still exists) for every politician of Biafran extraction slavishly serving the Islamic Sokoto Caliphate to retrace their steps and avoid this certainty of this onrushing rage from the masses and true owners of the land.

“This battle which IPOB has embarked upon will be at a time, place and methodology of our own choosing. It is imperative to state that in making that choice, there will be no differentiating between the subservient Biafran politician(s) who see nothing and hear nothing wrong when Biafraland is under Fulani military siege and their caliphate masters that dehumanize, abduct, torture and murder at will.

“As we march ahead in this sacred cause to restore our honor and dignity as a people no obstacle, be it human or material will be allowed to stand in our way. Very soon we shall show Dave Umahi the Fulani slave in Ebonyi Government House that IPOB has not only the capacity and reach but also the power through the grace of Chukwuokike Abiama to achieve our set objectives and fulfill our promise to the living and the dead.”

The separatist group added that, “We are waiting for them and their trumpeters in all the civilized nations of the world. The story of their humiliation will become a subject of study in foreign institutions. Our struggle has shifted to the international arena where every eye will be watching and taking note.”