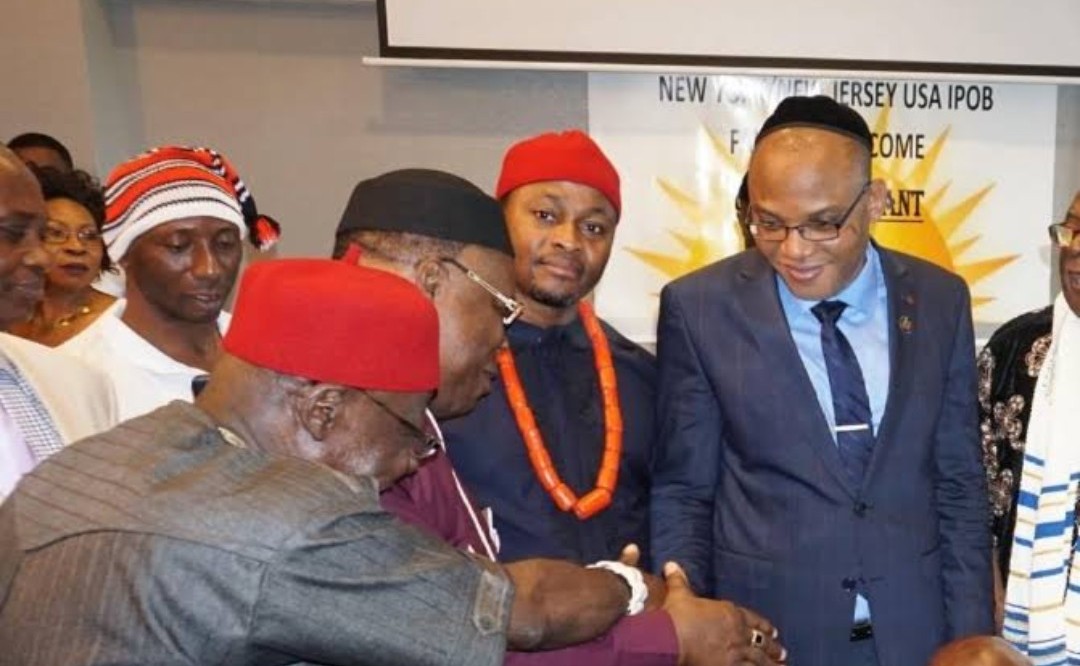 SAHARANEWS – There are fears among members and supporters of the Indigenous People of Biafra (IPOB), that the attempt by security agencies to re-arrest the leader of the group and Director of Radio Biafra, Nnamdi Kanu, may prevent him from attending his mother’s (Sally Meme Kanu’s) funeral.

This is even as an Abuja Court presided over by Justice Binta Nyako reportedly denied the prayers of Kanu’s counsel; Emeka Ejiofor, seeking for the restoration of his client’s bail and guarantee Kanu’s safety so that he could return home to continue his trial.

It could be recalled that Kanu in a tweet had announced the death of his mother on August 30th in Germany after attempts by doctors to restore her failing health stalled.

Kanu, who in a video also confirmed that the body of his mother had already been flown to Nigeria (Biafra Land), stating that he would communicate his supporters when the family concluded arrangements for her burial.

Our reporter, who interacted with some members of IPOB who chose to speak anonymously in Umuahia, the state capital, and Aba, the commercial nerve of the state respectively, reports that the members were yet-to-be informed about the burial arrangements.

They were afraid that their leader (Nnamdi) may not witness the burial of his mother as they alleged that information available to them has it that the federal government has placed security agencies on alert to arrest Kanu if he attempts coming back for his mother’s burial.

The IPOB members who disclosed that they were awaiting further directives from the leadership of the pro-Biafra group, however, assure that its members in Nigeria and the world at large, are making plans to ensure they were in attendance anytime the burial of late Ugoeze Kanu was fixed.

While business and other activities were ongoing at the Isiama Afara, the country home of Kanu, some of the residents who spoke to our reporter said they were sad when the news about the death of the wife of their traditional ruler broke.

They described her as a loving and caring woman that never segregate, stressing that it will take them long to recover from the shock of her loss.

Some respondents, including the President-General of the community, Mr. Ikechukwu Ndubueze, said the family of Kanu is yet to make any official statement concerning the burial apart from the video that he (Kanu) recently released.

It was further gathered from some other members of the community that according to tradition, Kanu, as the first son of the family, was supposed to be present at the burial.

But the uncertainty over whether Kanu would be present at his mother’s burial casts further doubt as to when the burial will eventually take place.

Some of the IPOB members in Umuahia told our reporter that they have been noticing the presence of plain-clothed security personnel around their leader’s village, but said that it would not deter them from actively participating in the burial of the mother of their leader when it is made known; they, however, said that making the burial of Kanu’s mum public for everyone to come and pay her last respect would make the world see that IPOB is peaceful contrary to the picture the federal government and heads of various security agencies are painting about them.

According to them, they were unaware of where the body of the wife of their traditional ruler is kept by the family. That is, whether it is in Abia State or any other part of the Southeast.

They however insisted that no matter the years it will take, the mother of the IPOB leader would not be secretly buried, but to be buried according to the customs and tradition of the people of Isiama Afara Ibeku community.

When contacted to know if the Kanu’s has reached out to the state government and the level of the state government’s participation in the burial of the wife of the traditional ruler on whose land the present Government House is situated, the Commissioner of Information, Mr. John Okiyi-Kalu, in a text message said he was in a meeting.

However, yet-to-be confirmed reports making rounds in the state have it that Kanu’s father died in a popular hospital in Umuahia, the state capital after weeks of being in the hospital’s Intensive Care Unit.

While the family is yet to make official statement over the death of the monarch, rumours have it that His Royal Highness; Israel Okwu Kanu, has been sick and had died on Thursday, October 31.

(VIDEO) If I Visit PDP Chairman’s House, I’m Not sure I Will Be Attacked The Way I Was Attacked In Oshiomhole’s House – Obaseki Recounts Ordeals