NBC to sanction radio, TV stations if they report details of… 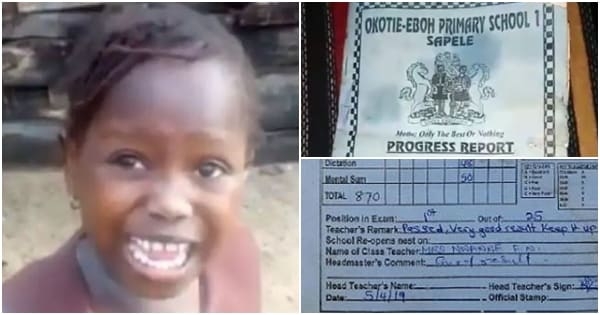 Young school girl, Success Adegor, has shown that she is not just a sharp mouthed girl but also a smart one.

SaharaNews gathered that the little star emerged as the first position in her class during her first and second term in school.

Success who is one of the students in a class of 25 pupils has outshone the others and her fans on social media are also impressed by her achievement.

Recall that the little school girl gained the attention of Nigerians after she was recorded grumbling for being sent home from school for owing her fees.

The dramatic way with which she aired her grievances endeared a number of fans to her and she has now become a sort of celebrity while others regard her as an education ambassador.

Nigerian celebrities and other well-meaning Nigerians who became aware of her plight have made sure to donate huge sums of money to her family while others promised to sponsor her education to university level. Congratulations to her!