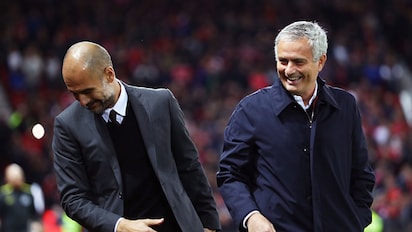 Rejuvenated Manchester United travel to the Etihad Stadium to battle city rivals Manchester City this weekend. The Red Devils will be counting on their impressive form that helped them overcome Juventus in the Champions League earlier this week to record victory over the Citizens. Jose Mourinho’s men are currently eighth on the log with 20 points from 11 games – nine points behind City who are topping the table at the moment.  However, the form of the two teams show that fans are in for nothing short of a fiery derby in Sunday’s Premier League clash at the Etihad.

With Pep Guardiola’s men yet to lose in the league this season, they have earned all bragging rights to make all the noise ahead of the game. That being said, Jose Mourinho, who many at some point had ruled out as incapable of handling things at Old Trafford, has steered his ship back from perilous waters.

The Portuguese has shown such resilience and fight, unlike never before to prove that he is the man for the job, registering successive 2-1 wins over Everton, Bournemouth and Juventus.

And now with the derby set to kick of on Sunday, November 11, at 7:30pm local time, it is time to look at three reasons that tip Mourinho to upset his old rival Pep at the Etihad Stadium.

Ever since Guardiola moved to Manchester, things seem pretty even between the two, with both having won two games apiece and drawn one. Mourinho’s last two visits to the Etihad have been positive, managing a draw and shock 3-2 victory after a staging one of United’s classic comebacks in the second half of their return fixture in April.

His partnership with Chris Smalling seems to have brought the best out of the Englishman, who has been very effective. Argentine marksman Sergio Aguero will certainly test their mettle. 3.Anthony Martial is unstoppable

The 22-year-old has been remarkable this season and looks a formidable force to reckon with in the English topflight. It will be interesting to see how the pacey Martial will match up to the equally speedy Kyle Walker.