Allegation Of Smear Campaign Against Buhari Is Sign Of…

BREAKING: Finally Atiku opens up on the true identity of the… 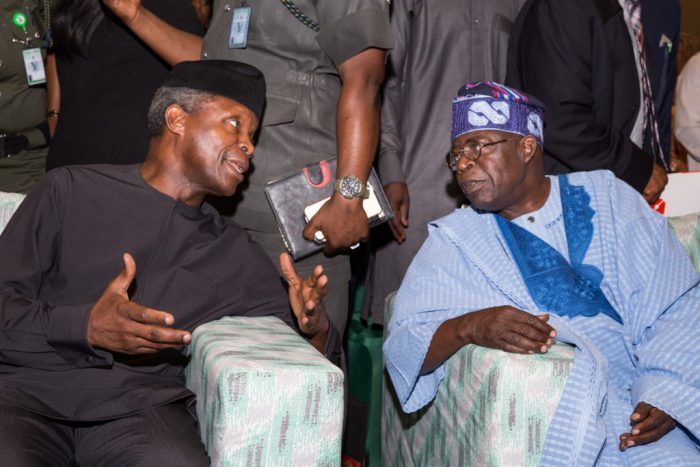 A chieftain of Yoruba socio-cultural group and elder statesman, Pa Ayo Adebanjo, has knocked the National Leader of the All Progressives Congress, Bola Tinubu, and Vice President, Prof Yemi Osinbajo, for keeping quiet in the face of the ongoing herdsmen’s violence and killings, particularly in the South-West region.

Adebanjo lambasted Osinbajo, adding that the Vice President was not handicapped as believed in some quarters, but chose to remain quiet.

The Afenifere chieftain stated these in an interview with Daily Independent, adding that the present 1999 constitution was also an “obnoxious constitution by the North­ern elite to oppress the South. All the things that are causing conflict in the country today are in the constitution made by the military.”

He said, “If Tinubu declares for president tomorrow and seeks my support, I won’t sup­port him. I have told him that even if they choose my son as president under this constitu­tion, I will oppose him. This is an obnoxious constitution. It is a constitution by the North­ern elite to oppress the South. All the things that are causing conflict in the country today is in the constitution made by the military.”

Adebanjo said Tinubu betrayed the Yoruba nation over his continued si­lence on the crisis rocking the South-West as a result of the criminal activities of killer herdsmen.

“All these things they are doing against the South-West now, what is Tinubu saying about them? He can’t talk. That was why I said he is deceiving (President Muhammadu) Buhari and Buhari is also de­ceiving him.

“Tinubu’s supporters have claimed that one of the reasons why we parted ways was because he likes spending money for people while elders like us are stingy. That is true and I have challenged him that if I were to ask for mon­ey, how much did he give me before I took the action that made him governor?

“When he was governor, he was stubborn on certain issues. So, during Christmas, he gave me, Pa Abra­ham Adesanya and Olanihun Ajayi cows as Christmas presents, but we returned them to him. We told him we would not accept his gifts because we talked to him but he refused to listen.”

On Osinbajo, Pa Adebanjo said, “How is Osinbajo handi­capped? Is that not the man who said: what do we under­stand by restructuring? How is he handicapped? Is that not the same Osinbajo who took (former President Olusegun) Obasanjo to court over the creation of local government areas in Lagos on the issue of true federalism when he was At­torney-General in Lagos? What has changed now?”