There is Nothing like biafra,We Only Want To Be Treated…

Top officials plots to attack facility where Kanu is detained, to accuse IPOB 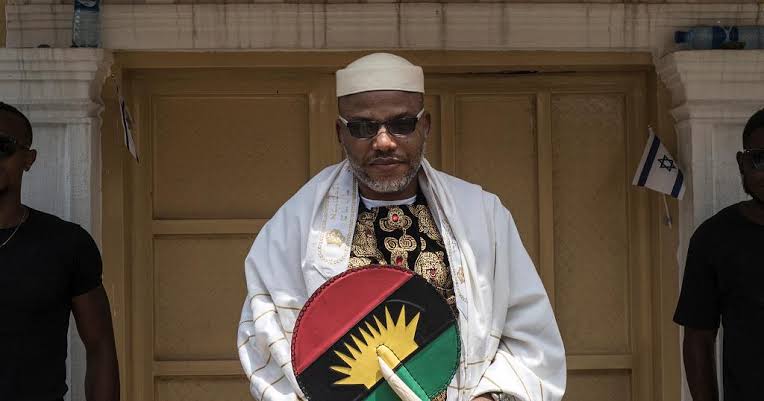 Some high-ranking government officials are planning an attack on the facility where Nnamdi Kanu, the leader of the Indigenous People of Biafra (IPOB), is imprisoned.

According to the source, the objective is to “assassinate” the leader of IPOB and accuse the group of attempting jailbreak that resulted to his death.

The source did not mention names that disclosed that a high-ranking political leader from the north and a prominent group were among those plotting the attack.

“They want to make it look like a jailbreak and turn around to accuse IPOB. Their aim is to assassinate Nnamdi Kanu,” said the government source who raised the alarm on Saturday.

ALSO READ:  Biafra: IPOB tells members what to do ahead of Nnamdi Kanu's co-defendants appearance in court

Meanwhile, DSS had alleged on Friday that IPOB members were conspiring to carry out an attack and free Kanu, who was illegally arrested in Kenya and repatriated to Nigeria.

On Saturday, Kanunta Okwu Kanu, the immediate younger brother of Nnamdi Kanu, the leader of the Indigenous People of Biafra (IPOB), called on the federal government of Nigeria to ensure that the life of his detained brother, Nnamdi Kanu, is not in danger.

Kanunta who condemned the unlawful arrest of Nnamdi Kanu, described it as “kidnapping”, which is “extraordinary rendition”.

“Nigeria and Kenya committed a crime against humanity by kidnapping Mazi Nnamdi Kanu that is called EXTRAORDINARY RENDITIONS. Nobody is talking about prison break here,” Kanunta said in a tweet.

“Those of you that believe assassination attempt on Mazi Nnamdi Kanu’s life, will solve the problems in Nigeria, I can categorically tell you, that you are a joke.

One Nigeria can be achieved through referendum, not force — Kanunta

Nigeria: Leaders must learn to remain calm during crisis — Osinbajo