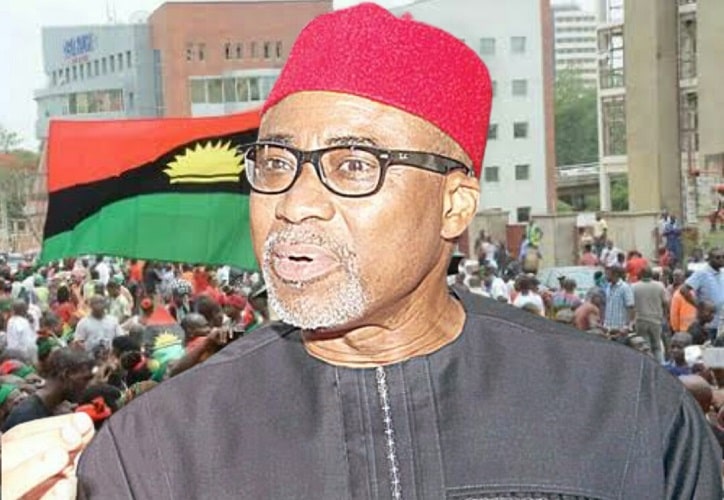 SAHARANEWS – The Indigenous People of Biafra (IPOB) has warned the Federal Government against arresting the Minority Leader of the Senate, Senator Enyinnaya Abaribe or risk the wrath of the group.

The group was reacting to a statement by a presidential spokesman that Abaribe should be in jail for standing as surety for its leader, Nnamdi Kanu’s bail in 2017.

Abaribe had on Wednesday called for the resignation of President Muhammadu Buhari for failure to protect the country and its citizens from Boko Haram and bandits.

He made the call on the Senate floor during deliberations on the rising insecurity in the country.

But the Presidency in a swift reaction by spokesman, Garba Shehu said Abaribe deserves to be in jail for failing to stop Kanu from jumping bail.

But spokesperson to IPOB, Emma Powerful in a statement yesterday said Kanu’s home was invaded in a bid to kill him forcing him to flee the country.

“The recent incoherent and roundly childish tirade by the presidency of Nigeria against Senator Enyinnaya Abaribe, unarguably the only distinguished senator in the whole of Nigeria, is a confirmation of the paranoia that has gripped the government in Aso Rock.

“Garba Shehu has not only showcased his ignorance of the law as it pertains to bail forfeiture proceedings in a law court, but his pathetic attempt to rewrite the history of the unprovoked bloody invasion of the home of our leader Mazi Nnamdi Kanu by soldiers which directly resulted in his inability to attend Binta Nyako’s court is well documented.

“It doesn’t matter how many times Aso Rock rehash this puerile line of ‘jumping bail’ argument, the facts are very clear and in the public domain for any sensible person to comprehend. If you went to Mazi Nnamdi Kanu’s house to kill him, is it a court in Abuja, where judges are impotent, that he won’t be attacked?” Mr Powerful said.

The spokesman said that it speaks to the intellectual hollowness of the APC regime that a seemingly high ranking presidential spokesperson is ignorant of the constitution it swore to uphold.

US VISA BAN: FG Establishes Committee to See That Nigeria Meets Up With US Requirements