Buhari commends army, others for ensuring ‘peace and… 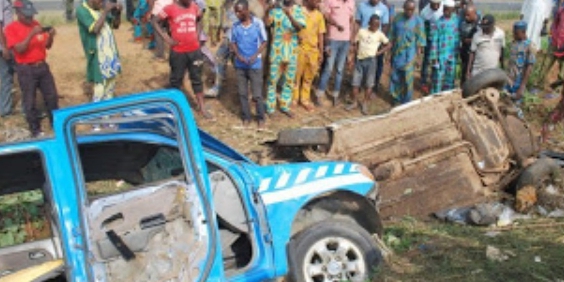 SAHARANEWS – About five persons were confirmed dead on Friday after a Federal Road Safety Corps (FRSC) van chased a taxi driver into a ditch along the Oyo-Ibadan Express road.

PM News reports that the five passengers in the taxi died while the FRSC officials escaped.

The FRSC Hilux van with code No. 1139(3) was reported to have been in pursuit of presumed road traffic defaulters in a Nissan Micra vehicle with registration No. Lagos KSF 831.

However, Bisi Kazeem, FRSC’s spokesman who commented on the accident said nobody died.
According to him, “it is not true that people died in the accident. There was no death whatsoever.”

BREAKING: Finally Atiku Open The Can Of Worms, Confirms “Buhari” Is From Sudan – See Pictorial Proofs