BUHARI RETURNS: It was a show of shame as Buhari was… 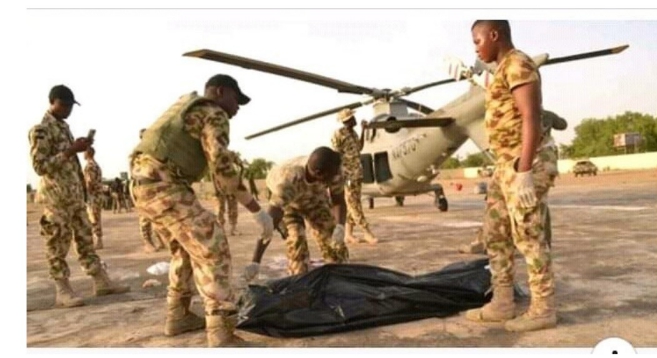 SAHARANEWS – A senior Air Force officer involved in the fight against insurgency in Borno State, has reportedly died after the tail rotor of a helicopter chopped off his head.

The deceased was simply identified as Air Chief Marshal Umar.

Sources told SaharaNews that the tragic incident occurred at around 4pm in Bama, Borno State on Saturday, April 6.

The aircraft was said to have developed a fault.

SaharaNews Confirms that the deceased, who was the co-pilot, had gone to the pick his bags and on his way back, he passed through the side of the rotor which was functioning.

ALSO READ:  Ghana Dare Not Demolish Nigeria's High Commission If We Had A President - Fani-Kayode

“Immediately his head was chopped off. The aircraft has been recovered and taken back to the air base. No damage was found the on tail rotor,” the source said.

The family members of the deceased have been informed while the burial arrangement have begun.

In another development, the Nigerian Air Force (NAF) says the Air Task Force (ATF) for Operation DIRAN MIKIYA has successfully destroyed a bandits’ logistics base at Ajia in Birnin Magaji Local Government Area of Zamfara.

Air Commodore Ibikunle Daramola, NAF Director of Public Relations and Information, disclosed this in a statement made available to Igbere TV on Sunday.

He said the ATF also neutralised dozens of the bandits at Ajia and Wonaka in Birnin Magaji Local Government Area of the state.

Daramola explained that the operation was executed sequel to Human Intelligence (HUMINT) reports indicating that the bandits were using a compound within Ajia as a logistics store to support their operations.

JUST IN: Oshiomhole Is Only Making Things Difficult For Those He’s Promoting For NASS Leadership, He’s Not A Member And So Doesn’t Have A Say – Sen Abaribe