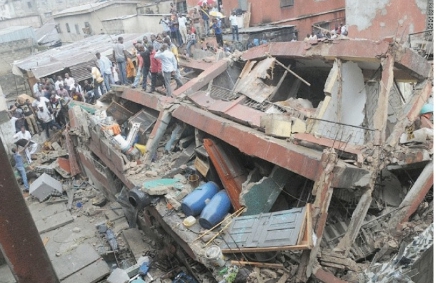 SAHARANEWS – Over 100 school pupils are feared dead following the collapse of Baden School in Lagos Island.

SaharaNews gathered that the school is situated at Itafaji Street, near Adeniji Adele, Lagos.
The building was said to have caved in around 10:20am on Wednesday.

The cause of the collapse is yet to be ascertained as at the time of filing this report. However, eyewitnesses told SaharaNews that rescue team have moved to the scene and were evacuating the trapped victims.

Another source told SaharaNews that some of the victims have been rushed to General Hospital, Marina, while many are still trapped and being dug out.