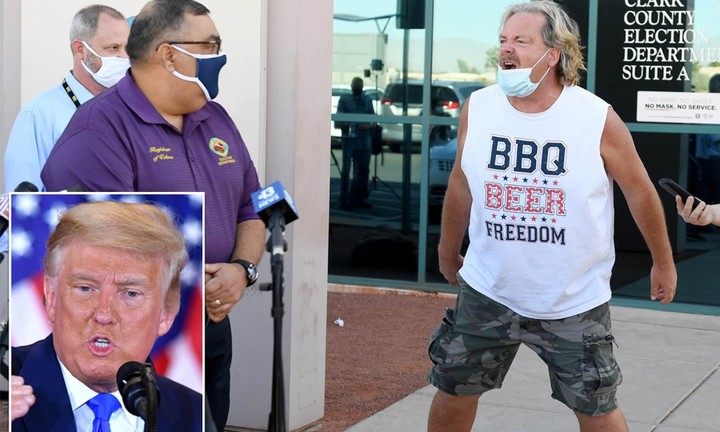 *Voter registrar Joe Gloria’s press conference was interrupted Wednesday
*The Nevada official was speaking in Las Vegas to update the state’s counting
*A furious man in a ‘BBQ, beer, freedom’ t-shirt yelled at the gathered reporters
*He accused the ‘Biden crime family’ of ‘stealing the election’
*Nevada is being keenly watched with the election hanging in the balance

Election officials in Nevada were updating reporters on their progress counting votes when a wild-eyed man in a ‘BBQ, beer, freedom’ t-shirt interrupted them to rant about Joe Biden.

Joe Gloria, the Clark County registrar of voters, was answering a question about how many ballots were left to count in the county, which includes Las Vegas.

‘As I mentioned, we are not prepared to give that information out,’ he said, before being interrupted.

‘The Biden crime family is stealing the election!’ he yelled.

‘The media is covering it up. We won our freedom for the world. Give us our freedom Joe Biden!

‘Joe Biden is covering up this election! He’s stealing it!’

The man then turned and walked off, leaving Gloria to resume his press conference

He then turns and walks off.

‘Where were we?’ one of the reporters asks.

No Republican presidential candidate has carried Nevada since 2004, and initial results showed Biden in the lead, but it hangs in the balance.

Trump fell just shy of winning Nevada and its six electoral college votes four years ago, and this year he campaigned hard in the state hoping for better luck.

ALSO READ:  2019 POLLS: USA Sends A Strong Message To Nigerians Ahead Of 2019 Election - A Must Watch Video

Watch The Video Below;