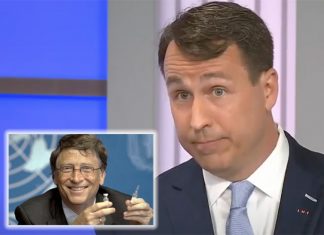 Cal Cunningham, the Democrat running for Senate in North Carolina, said he would be “hesitant” to take a COVID-19 vaccine approved by the FDA, citing “underlying political and financial influences” in Washington and encouraging the American people to “ask questions.”

“Yes, I would be hesitant,” Cunningham said in response to a question about a potential vaccine during Monday night’s debate against GOP incumbent Sen. Thom Tillis (R., N.C.). “But I’m gonna ask a lot of questions. I think that’s incumbent on all of us right now.”

Cunningham’s answer could provide fuel for internet conspiracy theorists who have been sounding the alarm about a potential COVID-19 vaccine by suggesting that, among other things, wealthy individuals such as Bill Gates are plotting to implant microchips in every American under the guise of a government-run vaccination program.

Cunningham’s skepticism regarding a potential vaccine runs contrary to the recommendations of medical experts, who have warned that public confidence and trust in institutions will be critical to any effort to inoculate the population. Americans shouldn’t necessarily trust the FDA or the federal government, Cunningham suggested.

Reframing one’s position as simply a matter of “asking questions” is a popular tactic employed by conspiracy theorists when asked to confront the implications of their extremist beliefs.

Tillis slammed Cunningham’s “irresponsible” rhetoric during the debate. “We just heard a candidate for the U.S. Senate look into the camera and tell 10 million North Carolinians he would be hesitant to take a vaccine. I think that that’s irresponsible,” the Republican said. “We are not going to release a vaccine that doesn’t have the effectiveness and safety that the gold standard of the FDA requires.”

ALSO READ:  BREAKING: Nigerian Court Sent A 67yrs Old Man To Jail For Killing A Cow That Was Grazing On His Farm