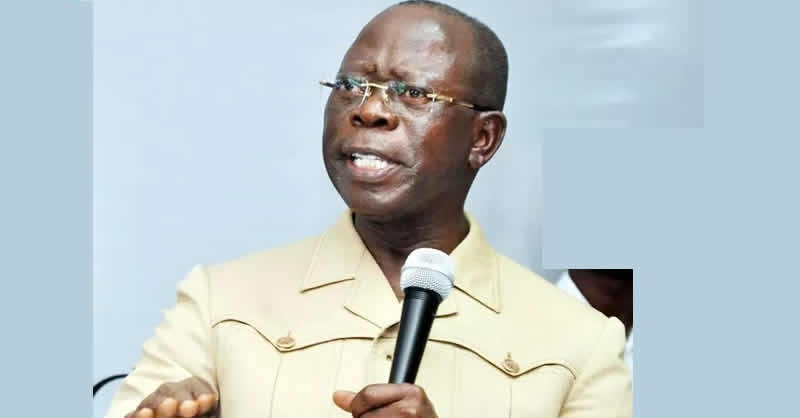 SAHARANEWS – The ruling All Progressives Congress has reiterated its position that federal lawmakers elected on the party’s platform do not need the support of their colleagues from the Peoples Democratic Party to elect the National Assembly leaders.

It said the APC lawmakers could only reach out to their counterparts from the PDP when there was a need for two-thirds of the members of the parliament to take a decision.

The party’s National Publicity Secretary, Lanre Issa-Onilu,said this in an interview with our correspondent on Saturday.

He was reacting to the belief in some quarters that his recent press statement saying that APC lawmakers seeking positions of presiding officers were free to lobby their PDP colleagues was contradictory to the position of the party’s National Chairman, Adams Oshiomhole, who was quoted as saying APC members would not share power with the PDP lawmakers, who he described as “devils.”

But Issa-Onilu said there was nothing wrong or contradictory in the position the party took on the leadership of the National Assembly.

He explained that the party does not need PDP lawmakers to elect leaders, since the APC is in the majority.

He however said the ruling party would be reaching out to the opposition party whenever two-thirds of members are needed.

The party spokesman said, “What I said and what the chairman said are the same because we agreed before both of us talked.

“What we are saying is that we have the majority and we don’t need the PDP lawmakers to elect our national officers.

“But there will be times that we may need two-thirds of members. When we need two-thirds, we have to reach out. That is the time the opposition anywhere in the world also wait for and make demands, otherwise they will withhold their support.

“But once you are using simple majority for anything, we don’t need them.”

Issa-Onilu said there was no way there could be unity between the PDP and the APC lawmakers in the National Assembly since the ideologies of the two parties are different.

He said the party did not tell Nigerians during campaigns that it would be working with the PDP to deliver its campaign promises.

He argued that if Nigerians wanted the APC and the PDP to work together, they would have asked the two parties to merge.

He added, “There is nothing that is called unity in the National Assembly. Opposition must defend those who voted for them because they don’t believe in what the ruling party promised.

“When they say no, we will say let us vote. Because we have the majority, we will always win, except when we need two-thirds.

“We did not campaign to Nigerians that each time we want to fulfill our promise, we will go and work with the PDP.

“If they wanted us to work with the PDP, they would have told us to merge. We are not operating the same system.

“It was clear that our campaign was focused on the masses, pro-power policies. Our policies are in line with that. Our economic policies are targeted at the ordinary Nigerians, whereas the PDP also has a clear-cut ideology by saying they will sell the NNPC, meaning we will lose control over the oil industry.

“Those are the things that satisfy foreign interest, big people and corporations.

“We want to tax luxury goods, PDP won’t do that because it will affect the corporations. This is how ideologies develop.

… ruling party is playing to the gallery, says PDP

The Peoples Democratic Party has said the All Progressives Congress is playing to the gallery on the issue of electing presiding officers for the 9th National Assembly.

The PDP’s Deputy National Publicity Secretary, Mr Diran Odeyemi, in an interview with our correspondent on Sunday, said the party was studying the situation and would shock the ruling party at the appropriate time.

He said, “It is unfortunate that the APC leaders are counting their chicks before they are hatched. We are not taking them seriously because we know the division and rancour in their fold.

“A disunited APC boasting that it does not need the opposition, is just playing to the gallery.

“It is a bad policy and unethical politicking to say you do not need the opposition to elect National Assembly leaders. The APC leaders who are propagating this theory, unfortunately, are not members of the National Assembly to know how the shoe will be too tight to put on without PDP’s cooperation and helping hands.

“We are still studying the situation, 24 hours is a long time in politics. We will come up with a joker that will shut up the APC and possibly teach them another political lesson that empty barrels make the most noise.”

Odeyemi also told our correspondent in a separate interview that the PDP would shock the ruling party.

He explained that the party would adopt a strategy to fill the positions meant for minority party in the Senate and House of Representatives in a rancour-free manner.

He said the party would not be dictatorial but would adopt a strategy that would be beneficial to all.

He added, “The PDP will adopt a special strategy to fill the positions meant for minority party in the Senate and the House of Representatives in such a way that it will not bring any rancour among our elected legislators. Consensus or election is not what we can talk about at the moment.

“The scenario about the leadership of the Senate and the House of Representatives is still cloudy, and who says we don’t have our own joker that will shock the APC?

“We don’t make noise like the APC National Chairman, Adams Oshiomhole, whose utterances will definitely spell doom for the party and its proposed candidates.

“Our party is studying the situation and will come up with our joker at the appropriate time. Nigerians are in for interesting politicking in June. It is then we shall be rated as master strategists.”

He said the PDP still had two months to decide, adding that the party was weighing its options.