I support Muslim-Muslim ticket, but I will leave APC &… 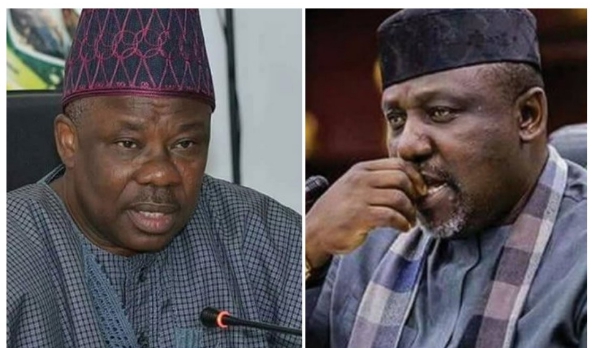 SAHARANEWS – ‎The independent national electoral commission (INEC) said the suspension of Rochas Okorocha from APC has nothing to do with his mandate as Senator elect.

A­ statemnt by APC spokesman, Lanre Issa-Onilu said the NWC would also issue a query to the Governor of Ondo State, Rotimi Akeredolu over his glaring anti-party activities, which greatly affected the fortunes of our candidates in the recently-conducted Presidential and National Assembly elections in the state.

But reacting, INEC’s Commissioner for Information and Voters Education, Festus Okoye, said Okorocha and Amosun’s suspension by APC was an internal party affair.

According to Okoye, the governors’ suspension has no bearing on their fresh status as senators-elect.

Speaking on the suspension and possible expulsion of Okorocha and Amosun by their party, Okoye told Thisday on Sunday: “The validity of the returns made are within the purview of the commission and the Election Petitions Tribunals.

“The suspension or expulsion of members of a political party is within the domestic realm of the parties and has nothing to do with the presidential and National Assembly elections.”

ALSO READ:  "Now Is The Time To Ban CAN In Nigeria" - Ibrahim Jalingo

JUST IN: Buhari Disgrace CBN Governor Out Of Office – See Why