A Man With an Empty Vessel,does not understand the concept… 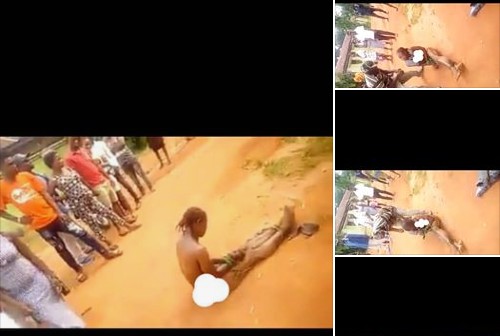 An unidentified young lady has been humiliated publicly for allegedly Insulting a politician in Delta State.

According to reports, a politician/high chief from Owanta area of the state ordered that the lady be stripped unclad, beaten and paraded publicly.

The lady was paraded in public, tied up and stripped totally unclad while being beaten in Ika local government area of the state as can be seen in a viral video posted online.

The Delta State Police command has been urged to immediately launch an investigation and arrest all those involved.

Meanwhile, Nigerians have taken to social media to totally condemn the increasing spate of stripping people unclad most especially ladies after being accused of a crime.

Recalled that we had also reported that a lady was stripped unclad for allegedly stealing a mobile phone and pepper inserted in her private part.

JUST IN: Goodluck Jonathan Finally Speaks On Nigerian Election,Reveals Why There Is “Civil War” Feelings